Calls to Execute the Father of Animation in Iran

Baseej pressure groups have called for the 70 year old Nooredin Zarrin-kelk , the father of animation in Iran, to be executed.

Zarrin-kelk is accused of having ridiculed a female student's chador, the head to toe Islamic cover, after she drew an angel with no hair. The incident led to organised protests by state backed fundamentalist Baseej students, who once again exploited the situation in favour of their recent demand for a second "cultural revolution".

Baseej affiliated websites however, have now gone one step further and demanded nothing short of the execution of the 70 year old lecturer.
One website even implicitly threatened Zarrin-kelk's family members by boasting to have obtained their personal telephone numbers and addresses.
British universities however will probably once again ignore the plight of their colleague in Iran, and continue to host Islamic Republic's "fake dissidents" and apologists. 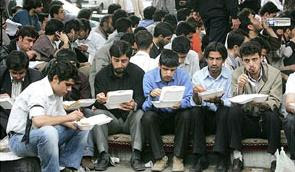 This is the 2nd cultural revolution

These Baseej monkeys will do anything for a free lunch.

These are the riff raff which the Islamic regime uses in its "Down With USA" demonstrations and other state-sponsored/staged events.

These are the riff raff which the Islamic regime uses in its "Down With
USA" demonstrations and other state-sponsored/staged events.

can you spell uncle tom?

You're no different than Khamenei. Willing to sell our soul just so you can call yourself Persian?

You still can't spell Chauvinist, can you?

You dumb Aliyev lover :))
Hope Aliyev one day gives you a good seeing to that you deserve and so much crave.