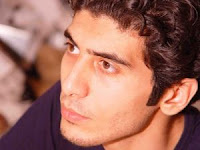 I am standing before you in this court so that the Almighty will be a witness before you and I. A witness to what is happening today to our beloved Iran and to its brave sons and daughters. So that upon the judgement day when we are held accountable, those of us who stand proud and those of us who hold our heads down will remember that such is destiny. The final reward and punishment is only by God.

I was arrested on 15th February when the intelligence ministry agents broke into my house. They smashed up our furniture and rummaged through our belongings just to maximise their intimidation. This was all because of a song I had written that according to the gentlemen had 'endangered the national security'. After that, I spent 44 days in solitary confinement where I was put under a series of emotional, mental and physical tortures. Allow me to describe just a small part of what I was put through:

- Hurling insults and profanities to belittle me, even ridiculing the way I looked
- Intimidating me by threatening to arrest my wife, even though she has had no political activities or played a role in anything I have done
- Insulting my war veteran brother and threatening to arrest him as well if I did not co-operate
- Intelligence agent threatening me with death (He said to me I can easily kill you outside here with a single bullet and no one can question me)
- Prison officials threatening me with execution
- Keeping me in a 2 metre by 1.5 metre cell without any hygiene facilities that led to infected boils all over my body
- Deliberate negligence in giving me my medication related to my heart problem
- Putting me in a cell next to an inmate with AIDS and making me walk with bare feet on his blood after he had committed suicide by slashing his wrists
- Giving me insinuating offensive  information about my wife
- Stripping me naked in front of an agent who was holding a camera in his hand, who kept laughing and asking me 'are you scared?' every time I protested at his immoral behaviour
- Severe physical beating when I asked to see the prison doctor, beatings so bad that the marks were visible all over me for a long time
- Chaining my hands and feet for long periods of time

And these were just a small glimpse of what I went through during my detention.

After the Ashura uprising which resulted in so many of my compatriots being killed, I felt it was my duty to condemn this inhumanity and use my musical talents in doing so. I wrote and composed a song, which became known as 'Ali, Rise up'.  The content of this song is to do with the exploitation of God, the Koran and the Imams by a bunch of impostors to achieve their demonic goals. In this song, I asked the Imams for help in uprooting lies and hypocrisy. Is it not strange that in these days to ask the Imams for help in battling against evil is considered a crime in our country?

Imam Hussein was martyred for good to triumph against evil, so should we not expect the same from his followers? Or are we just  supposed to ceremoniously beat our heads and beat up our chests and pretend we despise tyrants and despots?

I do not recognise this man as our president! Am I then not a Muslim? On the day of Ashura, I chanted 'God is Great' and I am proud of calling His name. Surely whoever jails me for chanting 'God is Great' is a non-believer and an infidel himself.

Those who make out they are Muslims these days, themselves disregard the most basic teachings. They easily lie to nation of seventy million and make false promises, and feign that they want to glorify Iran and Islam. Iran and Islam are both much grander than having the need for such claimants.

These policies of mass oppression and intimidation are dictated by which eternal power that justifies silence. Which divine laws allow such invasions of privacy into people's homes and into the privacy of people's private beliefs? and not tolerate the slightest of criticisms? These self interest seeking persons who claim to be kinder child minders than our own mothers, not only think they own this land but consider any non-conformity a crime and  trample on the basic rights of our citizens. I recommend, in a brotherly way, some reality check and some insight than just having your eyes fixated on the seats of power; for rectifying your mistakes in the future will be much harder.

Respected judge, I am worried today about your judgement, for my interrogators said you are their puppet and will do whatever they tell you to do. I hope God will reveal you the truth, so that God forbid, you will not be held accountable for what others have asked you do for them in another world.

In the end, I reject all charges against me and ask you to find me not guilty.

This is the song written by Arya, which has been deemed to 'endanger the national security of the country':

Let this serve as a timely reminder of the resolve of the Green Movement and the continued injustice imposed upon the brave people of Iran by the incumbent junta.

Arya's case in extremely poignant and a source of profound inspiration. It is hard to digest just how inhumanely he has been treated, but just as reassuring to hear of not only his resolute vigor but his mental clarity despite the extent of psychological torture.

My only hope is that his case, as well as others, recieves attention in the media and resonates in the way it should with all Iranians.

Thanks for helping Arya's voice resonate outside the courtroom Potkin.

Words of reason, intelligence, objectivity, justice and bravery. The complete antitithesis of the current kangeroo court black regime then!