To the Lebanese Women Without Hejab who Welcomed Ahmadinejad 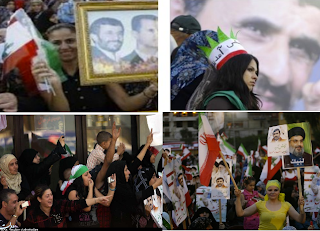 To the unveiled Lebanese women who went to welcome Ahmadinejad:

Have you ever heard of the Mourning Mothers of Iran, whose children have been murdered for having taken part in peaceful protests? Do you know that on the same day that you were cheering for Ahmadinejad, four of the Mourning Mothers of Iran were arrested? Can you imagine what these families are going through right now? They have killed their children, now they are arresting the mothers and you are cheering for the chief murderer like ignorant illiterates. Are you not mothers yourself or will you not become mothers one day? Have you ever heard of Kahrizak? Can you even imagine what went on there?

Have you ever seen the footage of how Iranian students were dragged like meat by the security forces in Tehran university ? Have you ever watched how your Hezbollah brothers raid people's homes in Iran?
Did you never see how Ahmadinejad's security forces simply ran over the protesters with their vehicles on Ashura? While you were dancing away in your exotic nightclubs, did you never have time to watch how Ahmadinejad's special forces break into people's houses and club defenceless men to death on the roof?

Have you ever heard of Hamed Rouhinejad? Before you let your enthusiasm for Ahmadinejad take over your brains, did you think what his mother could be going through right now? Did you think that she may be watching you on Iranian state TV and how that would cause her further insult to injury?
Have you ever heard of Evin prison? Do you read books? Do you read the papers? Do you go on the web? Did you never watch any of the videos of Neda as she was murdered?


And you still want to cheer for the man whose administration authorised and carried out those crimes?
So you may say Ahmadinejad gave you money, but do you know the price you will eventually pay for his handouts? The price will be the lives of your sons and husbands and the freedoms you have now. The very freedoms that Iranian women have been denied. For if any of you went out to greet Ahmadinejad in Iran the way you were dressed, you would have been arrested and bussed away to a detention centre and humiliated. Is there no limit to your stupidity and ignorance?

I understand your Lebanese men in order to impress you will sit in the cafes and HIRE a bottle of Champagne to look good and impress you.  If you are so easily impressed by false pretences then perhaps I am wasting my time here. In any case those of you who have been pictured screaming for your own version of Don Quixote hero, will go down in history as the quintessential symbols of nitwitted idiot women of Lebanon.
Posted by Azarmehr at 12:29 AM

They have sold their souls to the devil. And the devil will call them in!

It's indeed so easy for people in free countries to cheer for Ahmadinejad, or Castro or Chavez for that matter. Unfortunately, for many people, being against Israel (or the USA) is enough to warrant unquestioning applause.

Drones to the demonic despots! Some people just can't see bully boys playing with their toys! I.e. Nasrallah presenting Ahmandinejad with a captured Israeli rifle. Cor - HOW MATURE, HARMONIOUS AND PEACEFUL Eh?! Guys waving their pricks at each other! But then again it's fitting I suppose for Hezbollah's main gun-runner! The one trick pony of Ahmandinejad. Negativity to further fuel the furnace of bigotry and hate! Fine... So enjoy your pathetic little trophy gun Ahmandinejad while you can. Because pretty soon the betrayed and aggrieved Iranian people will put a bloody big rocket up your arse!

this is not related to the topic, but it is an easy way for me to relay some interesting info about ahmad obali founder of gunaz tv …. and his ever increasing real state ownership…..

please see it for yourself at...

I can´t speak in the name of all the Lebanese people, I speak in my name and the names of my friends, all Lebanese radical leftist activists, who by no means welcomed nor cheered Ahmadi Najad´s visit to Lebanon. We blogged, sent out emails, exchanged and spread information about his tyranny and fundamentalism.

We took information from your blog, and other blogs, and we tried our best to reveal his true face. I will not lie, we were few in a sea of many, but our voice was loud and clear. As much as we are against Israel and the United States, we are also against him and his government. I have visited your country with my family (who is a Shia family) and I have seen in my own eyes the works of people like Najad.

We hear your voices and we share your shout against the suppression of freedom of expression, the murder of women, queers, students, political prisoners..etc..etc.

Thanks for your letter, and we extend our hand to you and to the Iranian women and men who are standing up for freedom and justice!

Down with fundamentalism, be it Muslim, Christian or Jewish! Down with Ahmadi Najad and down with our government!

Get over it, Potkin!

The IRI has become the New Persian Empire, stretching from the Mediterranean to the Indus. People from Lebanon to Pakistan celebrate Ahmadinejad as a saviour and the Islamic Revolution as representing the ideal of freedom and justice, and an end to Zionist tyranny in the region.

Btw, I have published an article about your British journalist friend, Martin Fletcher:

You are mentioned in the article on page 7.

Iran has a very bright future.