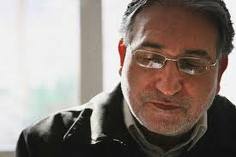 Until the post-election protests, Mohamad Nourizad was a supporter of the Supreme Leader and opposed the reformists in Iran. The brutal crackdown of protesters and widespread arrests that followed however, compelled Nourizad to write open critical letters to the Supreme Leader, which resulted in Nourizad himself ending up in jail, despite his impeccable revolutionary credentials and former loyalty to the revolution as a journalist and a film maker.

Prison only served to open Nourizad's eyes even further at the sheer scale of the tyranny and the crimes carried out against Iran's best sons and daughters. During his initial arrest, when he was given the rare chance of contacting his family, he told them 'It is not important how long I remain in prison, what is important is whether I leave this place with my head held high or not?' Determined to make up for his past support of a tyrannical state, Nourizad has indeed held his head high. Not only he has resisted all the pressures against himself, defiantly he has been describing what goes on inside Iran's prisons and has told the outside world the tales of Iran's individual prisoners and their epic resistance. In a series of letters, Flowers and Barbed Wire, Nourizad tells the outside world the injustices of Iran's 'flowers' incarcerated by a corrupt dictatorship hell bent on keeping the reigns of power at whatever cost and by whatever means.

In his latest letter, Nourizad describes the treatment of student leader and activist, Abdullah Momeni, sentenced to 9 years imprisonment.

'Dear God, our security men have exonerated the Shah's SAVAK in what they have done to Abdollah Momeni. They have insulted his mother, a mother of a war martyr, with unmentionable profanities to make him recant what they wanted him to say but he had not done. God where were you when Abdollah repeatedly lost consciousness as he was beaten up time and time again by his interrogators and his honour desecrated by the vulgarities they were hurling against his family?

They pushed Abdollah's head into the toilet and threatened to rape him with a stick and told him 'Not even the best of carpenters will be able to pull this stick out of you' in order to humiliate him.

Dear Lord, Abdollah is an educated Muslim, he is devoted to the glory of his country and averse to injustice and tyranny. He is a prisoner of those who tell him 'Why do you object to our wrong doings? Why do you expose our corruption? Why do you want to end our monopolies? What is it to you what the president and his advisors do? Why do you interfere in the Revolutionary Guards' stranglehold on the economy? Why do you criticise the clergy who dabble in everything but remain unaccountable to anyone? What is to you that we are making people despise Islam under the name of Islam? Why have you said the night will be over? You think there is a dawn coming?'

Nourizad finishes by raising the spirit of all those who carry on the struggle for freedom in Iran:

'To you the unknown but true children of Iran, I say, be aware and be certain that the dawn is still breathing and is alive, just like you are and just like freedom is. Hail freedom, hail the good God'
Posted by Azarmehr at 10:54 PM

This is an insane and satanical regime. An occupied army would not do what these barbarians are doing to us

Of course this is one of the 'enemies' Khamanie recently degreed to be making progress against. In otherwords the progress of promoting yet more suppression and fear by paying off those to oversee and spread YET more fear in the form of the Islamic Gestapo. Oh, sorry - Basij who still blindly excuse them as the 'volunteers of God.' Ha, yeah right...! Mohamad Nourizad woke up to the obscenities, atrocities and tyrannies of man's murderous greed and powerlust under the convenient guise of religion. And is now obviously paying for it! It's just a pity that too many other people just sleepwalk - hoping for a brighter change, instead of rising their ever louder voices of their dreams! In the end, the choice is simple! A dream nation where people can finally express their true souls without persecution. Or just the continued stagnation of Khamanie's black vulture regime - where human beings are just reduced to nothing more than mantra clucking chickens sitting brainlessly at his feet!

Let us embrace the spirit of hope and solidarity, for it is these bastions of change that give the impetus to strive for the downfall of this tyranical regime.

I hate to resort to such biblical propaganda, but good will overcome evil. It is but a matter of time. The regime is on it's last legs and are even resorting to the possible ousting of AhmaDinnerJacket to prolong their unwelcome stay. I just hope the masses aren't fooled by pseudo-change when it arrives.