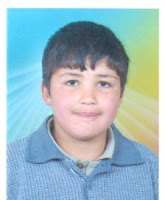 Sorry, couldn't watch the full video's of this! Pretty sickened and disgusted to the core that a boy - A SIMPLE BOY was tortured and stricken of life by egocentric, pumbing iron gun-totting thugs!
If there IS a proper justice on Earth and in heaven, then such evil cavemen souls deserve to walk the earth for a 1,000 years only surrounded by human misery upon their deaths! Repentance and forgiveness for their sickening crimes shouldn't come easy! I do feel soooooooo sorry for the child's parents. Assad and his murderous mate Khamenei really DO belong in HELL!

P.s. The recent Nasrallah support of Assad confirms they are just male machismo dicks who will quite willingly cut off the dicks of innocent 13 old small boys! Again it's not about religion or any true divine God. It's all about ego, money, power and the corrupt perservisty of thinking THEMSELVES greater than any proper moral or ethical conscience!

@anon: The only reason I publish your trash comment, is because I want all people to see your stupidity