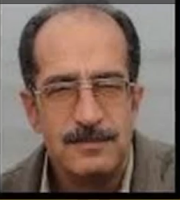 Who would you expect to be chain bound, hands and feet, and surrounded by revolutionary guards special units as he is taken to appear before the revolutionary court? A dangerous criminal? In fact, the person you see hands and feet bound in the footage below is a gentle and polished man, who has lost a kidney as a result of tortures he has suffered in prison. He is Siamak Mehr, an Iranian blogger, whose articles have infuriated the religious dictatorship ruling Iran. He is charged with"insulting the Prophet of Islam" and "enmity with God", charges that could bring the death penalty.

"Dear Mitra,
Remember I am not just a person, but I am also a notion. A notion which is deep rooted amongst Iranians, and I am extremely hopeful that finally we shall overcome this evil, this anti-human anti-freedom and anti-life source. Therefore never regard my physical destruction as the destruction of this flourishing notion" - Siamak Mehr's letter to his daughter.
Posted by Azarmehr at 12:36 PM