"The Wall Street Uprising" and Iran's Prisoners of Conscience

Ever since the Wall Street protests started, the Islamic Republic has been at full force to claim ownership of it. The "Wall Street Uprising" as the regime calls it, is yet another manifestation of the 1979 Islamic revolution. Friday Prayer Sermon leaders have time and time told the faithful in the Friday Prayers that the "Uprising" will be the end of America and the Islamic Republic will emerge victorious. Ayatollah Janati, who thanked God when his MeK son, Mohammad Hossein, was killed by the regime, said in one of his sermons, "The Wall Street Uprising was because of the Islamic revolution and the annual Qods marches throughout the cities in Europe and abroad, sowed the seeds of this uprising by raising awareness about the Islamic revolution". There have been solidarity marches with the Wall Street Protesters and even a website has been put up by the Baseej to support this "uprising". Iran's Minister of Intelligence, Heydar Moslehi, told the people in Iran that America has filtered Facebook and Twitter and slowed down the internet speed in order to contain the Wall Street movement and of course Press TV can't get enough footage of the Wall Street "uprising" and images of police brutality against the protesters.

But amidst all this pomp and ceremony for Wall Street protesters by the Islamic Republic, they have been ignoring another development in the Wall Street movement. The Wall Street protesters not only have not shown any sympathy for the Islamic Republic, they have actually been holding posters of Iranian prisoners of conscience. Campaign 99, are a group of Iranian activists who are raising awareness among protestors at Occupy Wall Street Movement on the situation of political prisoners and the
on-going repression of dissidents in Iran.

“The idea is simple ...”  says Campaign99.  “We have decided to talk with 99 people engaged in
Occupy Wall Street Movement around the world. We will listen to each person's narrative of why
s/he has joined the Occupy Wall Street Movement. Then we will narrate the life story of an Iranian
prisoner of conscience for that person.  After this mutual exchange of stories, we will ask the person
to send a message to and make a poster for that Iranian prisoner. While s/he is holding the poster,
we take a picture. This is for global solidarity.”

Below are some pictures of the Wall Street "uprising" Press TV will rather not show, but why is the Western Press not showing them either? 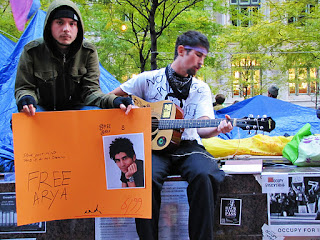 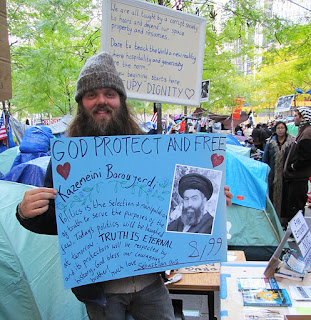 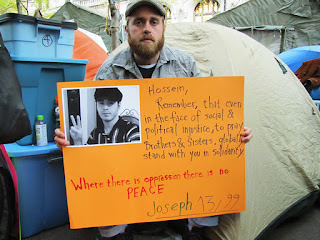 Yep - once again we are riddled with the sheer hypocrisy and political propaganda of the Iranian Regime and it's insidious mouthpiece PressTV. Let's stir up the protests of our enemies, but brutally crush those in Iran and Syria of course! Let's only report on all the bad news of our enemies and yet when it comes to Iran - hallelajah - such a great land of milk and honey eh? Oh, and let's even hack into and hijack a spy drone propably flying over Afganistan and then claim we shot it down invading Iranian airspace without a mark on it! After all, we've gotta talk up the prospect of war y'know! These days it's only the fear and scare tatics that keep our murdering One percent medieval Mullahs in power above the 99 percent of the oppressed Iranian people isn't it? Azardi Irani!

A case of opportunism and self-delusion. Similar sentiments were expressed in Tehran about the Dale Farm camp site evacuation.