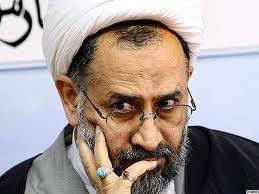 If there was ever an Olympic event of 'lying through your teeth with a straight face', the Islamic Republic officials would always be the top candidates for sweeping the gold medals. Last week however, they must have broken their own world records. There were numerous outrageous lies uttered by the elite members of the establishment, but amidst all the news of the attack on the British embassy and the mysterious explosion in Isfahan, one super outrageous lie by the Islamic Republic's intelligence ministry, Heydar Moslehi, which made the newspaper headlines in Iran, went unnoticed in the West: "US has filtered Facebook and Twitter"

"The internet and the social networks which were created by the enemy have now become their own nemesis. Obama stated twice in the Congress and once in his public speeches that social networks were created to confront the Islamic revolution with. Fortunately these plans have been defeated. Because today as a result of the Wall Street uprising, social networks like Facebook and Twitter have been filtered in the US. The internet speed also for security reasons, has been drastically reduced by the American government, in order for them to be able to manage the Wall Street movement"

You would have thought even the brainwashed Baseej would be able to verify the above claims, but then again the Baseej doesn't ask questions, it just obeys orders, is kept in the dark and fed on crap.