This is what I wrote after the last assassination in Iran: "Assassination of Iranian Scientists a Convenience for All" . None of the questions I asked back then, have been answered and today's assassination has even posed more questions.

The assassination took place near one of the main buildings of the Intelligence Ministry, i.e in a zone where there is even further extra security. 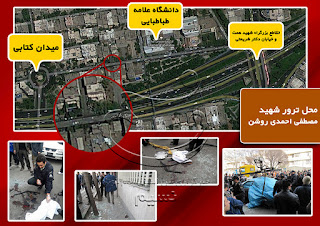 If you only stop anywhere near the building protected by high walls, you will be surrounded by plain clothes agents. Yet once again assassins on motor bikes in broad daylight and in middle of the rush hour traffic can blow up a car and not even be chased or apprehended.

Once again no CCTV footage is made available. There are no calls for witnesses to come forward and give descriptions of the assassins. Reason would demand that the area is cordoned off and a detailed investigation be carried out. Instead the blown up car is quickly toed away and the crime scene is almost immediately cleared up. One witness who works near the spot where the assassination happened heard the explosion and was intrigued that there was a heavy police presence there just before 8:30 am when the assassination took place.

At the end of the day, there are only two possibilities. Either this assassination was again a home grown assassination, with a variety of possible reasons for why Mustafa Ahmadi Roshan was the target. May be the victim was punished for approaching IAEA with information or may be he was responsible for buying faulty parts, who knows? Or it was the work of the Israelis and other agencies who are trying to stop IRI's nuclear program through covert actions, , as the Western media suggests. In which case it proves, the IRI Intelligence Ministry who claim they can read everyone's emails and have an omnipotent presence everywhere and quickly stifle any dissent are in fact completely incompetent and unable to provide protection for Iran's citizens.

It is all lies. Iran is run like a police state. They can catch a so called "CIA" spy but can't catch a so-called MOSSAD assassin? Give me a break. This is what the Mullahs do when they are facing external crises. They create internal CRISES to deflect the public's attention. Simple as that.

This article in Tehran Emrooz Daily claims that a project that Roshan was working on was directly related to Uranium enrichment.
http://www.tehrooz.com/1390/10/22/TehranEmrooz/808/Page/2/
Look for the article:
جزئيات ترور‌‌ دانشمند‌هسته‌اي

This is most likely done by MOIS' special ops division GDSO to spread the illusion that Iran is under attack. What we have is a desperate and declining mullah regime that is fighting for more supporters. Do not buy into this disinformation scheme.

Once again security is so painfully and conspicuously lax, that it doesn't take a genius to smell a rat! We can only hope that with the Iranian people suffering more and more everyday, that the ashes under the fire once again soon explode to get rid of THOSE murderous and cheating rats!

If you have no clue about science and technology stop making a fool of yourself. Chemical engineering has alot to do with producing nuclear material. Actually nuclear engineering is a subset of a chemical engineer. So a person with a Chemical engineering degree can easily have a Nuclear engineering profession. This man was assassinated by Israeli Mossad. They all but have directly confirmed it. I don't care what you are or you not, but if you are for killing of an Iranian scientist in support of the murderous Israeli regime, you may as well go to hell.

I find it incumbent that western media start reporting incidents with objectivity and rationale, rather than copy and paste/lazy journalism feeding off what the IRI news agencies give them.

It seems the IR now has a stranglehold not just over domestic media but international media through using their own tools as a conduit for western journalists.

It is ridiculous that the BBC for instance will ALWAYS state that public videos showing brutality "cannot be verified", but when reporting instances direct from a totalitarian regimes media there is no such accompaniment to any article or report.