More Pictures from Stop the War Rally on Saturday 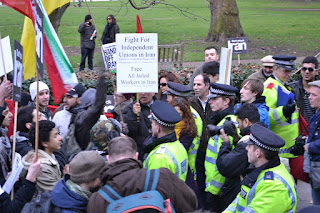 A man holds a placard, calling for Independent Trade Unions and Freeing All Jailed Workers in Iran, in the middle of the Stop the War rally in London, last Saturday. The man holding the placard is immediately attacked by STW "peace activists". Presumably having free independent trade unions and jailed workers released from prisons in Iran is not in tune with STW's peaceful anti-imperialist aspirations.

But more than welcome amongst the STW ranks are these two "peace activists", ardent supporters of the Supreme Leader 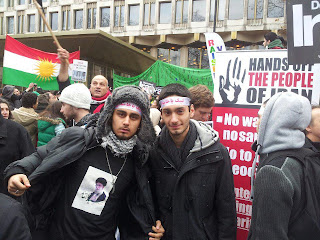 And of course pictures of the child murderer, Bashar Assad are also welcome by STW "peace activists": 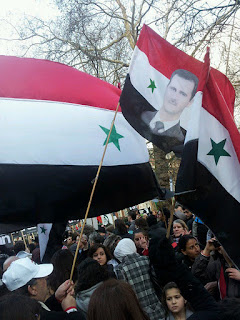 While Bashar's picture is carried in the streets of London, more children lose their lives in Syria:

Just as some news channels have finally waken up and called those protesters who met in The IAEA delegation in Iran as Basiji Militia instead of 'students.' Perhaps a more appropriate name should now be given th The Stop The War coalition? Any suggestions anyone?