"The Islamic Republic is its own biggest enemy and the Iranian "opposition" abroad, is its best friend" - Words of a wise man who told me this ten years ago and the statement still holds true. The Islamic Republic continues to shoot itself in the foot but the Iranian "opposition" abroad, through its inherent stupidity, knowingly or unknowingly, helps the regime climb out of the hole.

An amorphous bunch of narcissist individuals, who have no idea what must be done outside Iran, with too much time on their hands and only one expertise; how to apply for a grant for their pointless cyber activities and writings from some official body in the West.

Most that can be expected from these buffoons is to hold a meeting, where a group of like minded expats will gather and tell each other the 'Islamic Republic is bad' and then applaud each other for their tuppence worth speeches or some kind of cyber action like changing their Facebook profiles in support of some prisoner of conscience in Iran. An amorphous bunch who total up to a huge Zero!

This footage I came across today however, may top it all for the Iranian opposition abroad. It seems this is the best show they could put up in the European parliament, to present the Iranian New Year and the Nowruz celebration. This Haji Firooz, the mammy archetype like character, judging by its name "Haji" - a title bestowed upon Muslims after they have completed their pilgrimage to Mecca - is one of those Islamic imports into the pre-Islamic tradition of Nowruz, probably the worst face of Nowruz celebration which should be done away with. Nowruz is first and foremost a beautiful celebration of the new which replaces the old and certainly its time to replace these old dinosaurs with something newer in the evolutionary cycle.

I can just imagine how uncomfortable, some of the MePs must have been and how they must have been praying for this minstrel show of mammy archetype nonsense, with all its racist overtures, by the Iranian "opposition" abroad be over and done with. It is amazing that these Iranian "opposition" figures are still unaware of the references in the Western culture they live amidst.

Two of the biggest fibbers, Ahmad Rafat and Ebrahim Nabavi, that I have ever come across amongst the Iranian "opposition" figures in exile, "fighting for democracy in Iran" in the European Parliament: 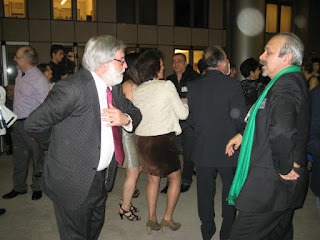 It really is time for the new to replace the old!

"""opposition" abroad, through its inherent stupidity, knowingly or unknowingly, helps the regime climb out of the hole.""

99% agree, nicely written, I believe is unknowingly.These are after shell shock behaviour....they need to be educated in a friendly environment. Most of Iranians/ including myself has been 'Tahghiir shodehand"and been left alone with no identification and solid belonging sense, in a free country which even did not like it. They still dancing with the music of 32 years ago, unpleasant and vague.Exited of future freedom which I think is very near....may be ashamed of their own negligence; they are left with childish and even bullying way of attracting attention...

Seemingly similar to the fluff outside worldwide media then! Merely pontificate or skirt about the edges of what is insidiously wrong with the Iranian Regime - without really thoroughly highlighting or attacking the jugular of what is an abhorrent evil inflicted upon the Iranian populace with it's ever increasing and deperate tactics to keep the Nation afeared and oppressed by it! Ha---Now the Regime is even implimenting more supressive measures care of China cyberware! Two nations who have always been religiously and ideologically opposed to the point of executions, but of course WILL forget ALL their self-righteous sham princibles for the sake of money, greed, power, oil and geo-strategic influence!

OT, a message from Israelis to Iranian people:
http://www.youtube.com/watch?v=7agK8MIJ3T0&feature=youtu.be

Thank you Azarmehr for this excellent piece!
I so much agree with your definition “An amorphous bunch of narcissist individuals” but they definitely do not deserve the title “Iranian ‘opposition’ abroad”
These people are no opposition at all. In fact, the person who organized the event, Anwar Mir Satari, is well-known to be the main Iran agent in Brussels. He is the unofficial liaison of the regime with the European Parliament and the Belgian Parliament.

There are no MEPs or parliamentary assistants or staff in the audience. They are all Iranians invited by Anwar to fill the room.

The main person sitting in the middle in the panel (in blond) is Anwar’s contact Sabine Meyer, an adviser of the Greens group and the main lobby of the Iranian regime in European Parliament. The Greens control the “Iran delegation” of European Parliament, who’s only task seem to be arranging visits to Iran and invite their officials to Brussels. Isabelle Durante Green MEP from Belgium once gave a special reception to the terrorist Foreign Minister of the regime, Manoucher Mottaki. All MEPs in the panel are from the Greens, plus Firoozeh Nahavandi, an academic who publishes Op-Eds in Belgian papers defending Iran’s position whenever the sanctions get tightened around the regime.
This bunch does nothing but following the agenda of the Islamists in Tehran. By portraying themselves as opposition, they want to divert the attention from the real opposition people who want nothing short of the toppling of the whole system of Supreme Clergy.

@Kambiz, there is an interesting piece in mentioning some of these people you mention. It seams Iran Regime is sneaking all around us.