But it gets better, Mehr News Agency's earlier. The earlier copy of Mehr News site states 373,000 people are eligible to vote in the Ilam constituency.

After the "elections", and having forgotten the earlier published figures, the same news site claims 380,000 votes have been cast! DOH! Where did the extra 7000 come from? 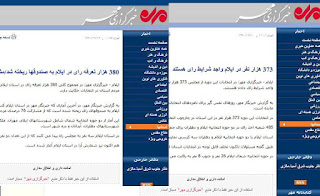 Well much like your recent run in with that fudging Regime mouthpiece Kian Mokhtari on Al Jazeera eh Potkin?
What was it he ultimately let slip when you rattled his cage away from the usual cosy sycophantic ride he gets on PressTV? That 'Iran is a BUDDING democracy with a long way to go.'
What!!! You mean after 33 years on from the Shah AND the Islamic Republic STILL ain't delivered on a PROPER democracy to the people! Well there's another shot in their foot for yer! If anything Potkin, you didn't scream at Kian Mokhtari after his Hermann Goering trait told you to shut your mouth. His own suppressed logic and conscience did! One look into Kian Mokhtari's eyes and all Regime stoolies are just left uncomfotably wriggling on the hook when their usual deflections and distortions aren't allowed to prevail. Ha, just a pity of course Potkin that you didn't have more time to make his OWN betrayal of conscience make a complete and utter fool out of him! So----Back to PressTV Mokhtari! I'm sure your pseudo intellectual propaganda will be obeyed on there without question!

We can only hope this is Khamenei's Mobarak moment. Where even cooking the books over voting turn-out eventually turns against him! It's annoying that only you Potkin made the case of the very possible liklihood of voting numbers manipulation in Iran. Even the like's of Al Jazeera tended to overlook this probability. And yet for some unfathomable reason they give more air time and analysis to the possible vote rigging in the Russian elections? Why is it that the mainstay outside media always tend to accept the IRI propaganda? It seems to be a very lazy and lax reporting attitude and yet very frustrating and galling I'm sure to a lot of Iranian's who feel betrayed by such a roll over couldn't careless attitude from the outside media? Perhaps in a future blog you can have a more credible number on the real percentage of voter turn out?

It is this very prospect which terrifies Ayatollah Khamenei . He is a meglomaniac who uses terror to keep control . At some point he himself will be swept away by it !