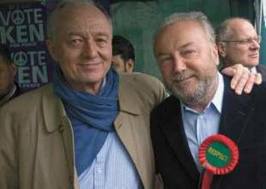 George Galloway's victory at Bradford West was welcomed by most Islamic Republic news websites, as a victory for the champion of Palestinians and Muslims in Britain, without a dickie bird mention of Galloway's past allegiance with Saddam and Uday Hussein or his pussy cat performance at the Big Brother.

The ultra hardline Kayhan run by the former Evin prison interrogator, Hossein Shariatmadari, went a step further however and expressed hope that Livingstone will also become the next London Mayor and Lauren Booth be the first veiled woman MP in UK's parliament.

Translation of the Kayhan article:
"Defeat of Labour Party by Press TV Presenter in 'Mid-election' special report
Press TV presenter wins the 'mid-election' parliamentary seat in oneof English constituenciesPress TV reports, that despite having been removed from Sky satelliteand viewers having been deprived from viewing it, George Galloway, oneof its presenters has won the Bradford West seat in the UK parliamentGeorge Galloway the candidate for Respect Party won a landslide inBradford West. He won by 18000 votes, more than 10,000 than hisdefeated Labour rival.Some of Galloway's supporters have contacted Press TV and expressedtheir hopes that Ken Livingstone will also win the next mayoralelections. Livingstone was criticised by some of UK media for havingworked regularly with Press TV.Some have also suggested that Lauren Booth another Press TV presentershould also be encouraged to stand as a candidate in the UKparliamentary elections and becomethe first female veiled MP in UK's legislative body.OFCOM, in the beginning of the Western calendar annulled Press TV'sbroadcast permit and in a questionable action without any crediblereply to the questions posed by the board of Press TV, removed PressTV's broadcasts from Sky services"
Posted by Azarmehr at 9:54 AM

Galloway's political convinctions are about as trustworthy as his marriage and fadelity ones! In otherwords he's nothing but a dick waving male machismo ego who's faith and faithfulness can be brought and sold depending upon how well it serve's is own selfish and smug peccadilloes!