No Singing and Dancing for Kindergarten Kids in Iran 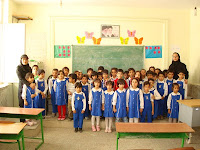 Islamic Republic's reputation for being an anti-fun state is no secret. Except for the usual apologists who do not think people's pursuit of happiness is in any way as important as the anti-imperialist/anti-Zionist rhetorics, it doesn't take a genius to realise the incompatibility of a drab state ruling over a nation whose joyous culture has actually been its very reason for survival and continuity.

Islamic Republic news sites and papers today reported Valiollah Nasr, the head of the Welfare Organisation for the Tehran province, tell Fars News Agency that 'the authorities will deal severely with kindergartens which have an immoral syllabus and teach children to sing and dance'. He added that 'the kindergarten's programs should be in line with Islamic values.'

He didn't say what these 'Islamic values' were and whether they included public hangings and stoning.

'Pre-defined programs have been sent to the kindergartens and they have no excuse to teach children immoral stuff. In recent years, kindergartens have been teaching kids to sing and dance but they will be dealt with severely if they continue to do so this year' Nasr reiterated the stance against singing and dancing in kindergartens.

The rest of Nasr's interview with the Fars News Agency was about the special camps to cure drug addicts running out of space for female addicts!

One wonders if the head of the Tehran Welfare Organisation sees a connection between the bleak lacklustre life and the growing drug addiction problems in Iran.

The crackdown on happiness in Iranian kindergartens comes after Barbie dolls and Simpson toys were banned. Superman however escaped the ban because it was seen as a defender of the dispossessed and the downtrodden.

The Iranian Taliban strikes yet again! Enforcing sanctimonious insanity within the public domain, but probably geting up too all sorts of depravity and smug party debauchery behind closed doors in private of course!
...I was always haunted by the comment of an Iranian friend's 9 year old neice. When asked why she doesn't take pride in her hair, she just replied, 'What's the point. Later on I'll be made to hide it!' And all the time the male machismo of the mafiso and medieval Mullah state is allowed to rule - that young girl's statement will also soon become yet another oppressed and sad grown up woman oh-so-true... Therefore why has complacency apparently replaced 'Azardi Irani!'

Iran is not a terrorist country. Irani people are just awesome. Ahmadi nayad is my favourite leader. they have strong Islamic believes.
umrah package 2012