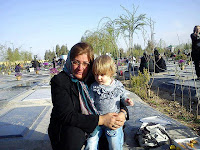 The woman on the left holding the little girl, is Hajer Rostami Motlagh, mother of Neda Agha Soltan, the young girl who was killed in the post-election protests. Images of Neda Agha Soltan's last breaths after she was shot became viral around the globe and she became a symbol of Iran's Green Revolution.

The little girl on the right was born on the same day, Neda Agha Soltan was killed and her parents named her Neda. An amazing bond has developed between the two since the little Neda was introduced to Neda Agha Soltan's mother.

Hopefully the little Neda will grow up in a free Iran and she will not fear protesting peacefully against her government. Hopefully she will live life to the full and enjoy all her abilities and talents.

Aww, what a beautiful little ray of sunshine ♥
I hope this dark tyrannical regime will soon fall. You can see the misery in Hajer's face, who like many Persians lost so much :(

That's a lovely story. And let's not forget that there have been so many hundreds of innocent lives, similar to Neda's, taken by the treacherous acts of the IR regime in the past 33 years.

We hope that the new generation of young people will have an opportunity to live in a humane and democratic country.