How dare You Hold The Eurovision Contest in Baku?

A wise man once told me, a society which is cruel to animals will disregard human rights too. In the past week there have been some repulsive reports of the most detestable mistreatment of animals in Iran. Like this poor lion in a Mashad zoo, which had his mane set on fire. The perpetrators filmed the lion's agony as they laughed and cheered: 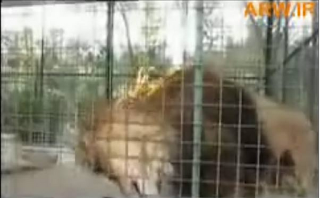 In another incident, a donkey was hit repeatedly with a sledge hammer in Semirom, South of Isfahan. The footage of this vile despicable act should only be seen if you have nerves of steel for its truly sickening:

With such incidents of cruelty beyond belief against God's innocent creatures, what do men of cloth and turban, who claim to represent God on Earth, have most on their mind in Iran? Will they issue a fatwa and condemn these sadistic and atrocious behaviours in society? Not likely. Such cruelty against animals is an insignificant matter for these men from the dark ages, even though it was reported that those who beat the donkey with a sledge hammer had also been involved in some other animal cruelty cases, equally as disgusting if not more, such as blowing up a gazelle to bits with an air  compressor and setting another gazelle on fire after pouring petrol inside it.

So what is the main concern of Iran's clerics, these guardians of morality, at the moment? Apparently the most pressing matter on their mind is the  Eurovision concert to be held next month in Baku, Republic of Azerbijan.

The notorious Friday Prayer leader of Tabriz, Mojtahed Shabastari, also the Supreme Leader's representative in the E. Azerbijan province, a particularly monstrous cleric and one of the founders of the Islamic Republic has been tearing himself apart worrying about the Shiite population of Baku having to endure the shame of hosting the Eurovision concert followed by a gay parade.

Below are some of the pictures of Mojtahed Shabastari's organised mob who had nothing better to do on a rainy day, than to go outside the Azerbijan Rep. Consulate in Tabriz and protest vehemently against the Republic of Azerbijan's audacity in hosting the next Eurovision concert.

Not only Iranian people are deprived from singing and dancing, Iran's clerics are now also telling Iran's neighbours that they can't have fun either. 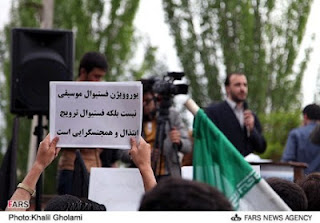 This placard reads "Mr. Aliyev instead of holding a gay parade, think about liberating Karabakh" 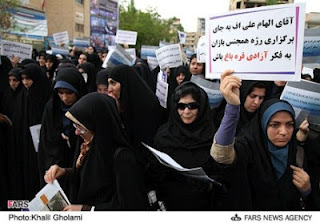 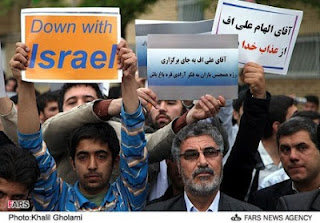 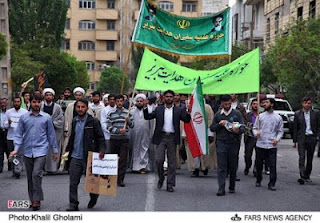 what did you expect potkin.the start of this regime was by interfering in other countries interior policies like Iraq, Palestine , Lebanon ... they wanted to open a way to Quds from Karbala. they have solutions for all over the world,but when it comes to Iran...

Go ahead man, write our pains, say the untold.
I love the Eurovision, it is a big pride for Azerbaijan, I am an azerbaijani gay and i'll be there in that f*cking fantastic gay parade! f*ck the shit sorry shiite! Mollas. Yashasin Azerbaycan...lysne

It goes to show how low a people can be brought. To just remember that the territory of current day Iran once harboured a civilisation that is considered by many the beginnings of human endeavour becomes an act of agony when faced with today's Iran. We Iranians are by far the most despicable people on earth, just by virtue of this truth we don't deserve to call ourselves "iranian". To be Iranian once had a particular ethnic and cultural/religious meaning, what we witness today has nothing to do with Iran or Iranians, the country should be called Islamistan and leave it at that. And frankly I don't see how we might repair the desolate state of the society and pysiche of Iran other than utmost authoritarian state violence and collective punishment.
I am neither so blind nor so decadent to deny what i see before my very eyes, what I've been seeing for the entire two decades of my life as an iranian born person. We need nationalist military dictatorship coupled with elements of zoroastrian theocracy and extreme societal discipline and a harsh authoritarian-state justice system. And the first thing in the cross-hairs must be mosques and turbans.