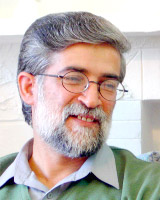 Hojat-ol-Islam Ahmad Ghabel, Muslim Shia cleric, Iranian theologian and seminary lecturer, researcher and author and most notably a prominent Iranian dissident died yesterday in hospital. Finally the good man "who saw nothing but splendour in being chained" to defend freedom and justice was truly set free.

Ghabel was arrested several times and appeared before the Special Court for Clergy. His last arrest was in 2009 on his way to Qom to attend Grand Ayatollah Montazeri's funeral. He was freed on bail after 170 days  but then re-arrested a year later when he exposed the secret mass executions at Vakilabad prison in Mashad.

Ghabel had the rank of Ijtihad and one of his ground breaking fatwas was about hijab, where he argued it was only obligatory for women to cover their body. He was a good man who lived his life as he preached. May he rest in peace now.
Posted by Azarmehr at 2:00 AM