Ken Livingstone is Back on Press TV 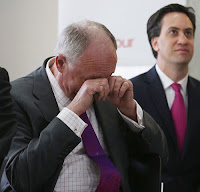 According to Andrew Gilligan's blog in the Telegraph, Ken Livingstone has decided to return to Press TV. Last night, he  hosted Press TV's flagship program, Comment, in the absence of his comrade, George Galloway, who is on a trip to Venezuella .

"My parents spared me religion" is how I remember Ken Livingstone boasted about his atheism on TV. Yet the man who wore his atheism on his sleeve, quickly dropped his scruples for votes and for money.

During his bid to become the mayor of London again, he was so desperate to pick up Muslim votes, that he pledged in Finsbury Park mosque, to make London a beacon of Islamic values!

And now by deciding to return to Press TV, Red Ken, this icon of UK Left, advocator of international socialism, defender of gay and lesbian rights and champion of feminism is once again working for a religious dictatorship that has massacred thousands of Iranian socialists, represses gays and lesbians, persecutes religious minorities in Iran and treats women as second class citizens. How hypocritical is the UK Left?
Posted by Azarmehr at 2:08 AM

So much for your own code of princibles eh? Just like George Galloway: Yet another two-faced sell out that assists a theocratic tyranny to crush Iranian democracy and help slaughter a Syrian one - purely for their own self serving hubrus ego, publicity and a wad of blood money stuffed into their own back pockets!