Iran Tribunal in the Hague - "I will bear this pain forever" 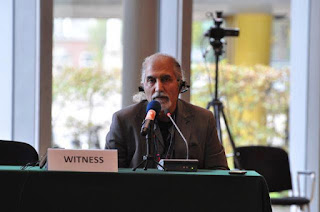 It may only have been a symbolic trial, but it is also a documentation of the worst terror years in the post 1979 Islamic revolution in Iran.

Witnesses who survived the massacre of Iranian political prisoners in 1988, gathered in the Hague, in front of international judges and lawyers between 25th and 27th of October and described the terror of the eighties and how 5000 men and women, young and old were summarily executed without even a proper burial.

Below is the witness statement of just one of them, whose account of what he saw, shook the audience:

A- I was arrested after the 20th June demonstrations against the new regime. One of my relatives and I used to re-write the anti-regime handbills and hand them out. He was arrested first and he had given them my name under duress. When they first came to our house to arrest me, I wasn't there, they took the books and the handbills they found in the house. They also took my sister and said to my mother, we will release her whenever Mehdi gives himself up.

Q- Why was your sister hospitalised?

A- After they arrested me, my sister thought she would be released but instead her interrogator told her, not only she would not be released, but that she will be executed. My sister went into a shock, when she went back to her cell, she felt she was being choked and collapsed, other female inmates started shouting she is dead, she is dead, Guards then came and took my sister to hospital and returned her the next morning. But she suffered from the after effects of this trauma for the rest of her life.

Q- How long was your sister kept in prison after that?

A- They released her after a day. They took me to the Nazi-Abad Committee, they kept me there for seven days, because they said there wasn't enough room in Evin prison. I was finally taken to Evin prison, at first we had to sleep in the corridors until they found a cell for me and I was there for six months.

A- Yes, I really believed I hadn't done anything that bad. I kept saying to them I am not interested in politics, thinking they would release me sooner. This was what some of the prisoners had decided to do, they agreed to declare themselves as repentants, thinking they would then be freed.

Q- How did you have to prove to them that you were repentant?

A- They called me once and asked, "Have you repented?". I said, Yes. They asked, "are you prepared to take part in the execution of prisoners?"
I thought by answering them like this, they would release me. Unfortunately they took me and someone from my cell as well as some others from other cells and gave us a head cover that covered our eyes, but I could see from under it. They took us to a room first, more and more came and then they put us on a mini-bus and took us to a place of execution. I still thought they were bluffing and testing us. I never thought they would give us guns. I saw the guards standing with guns. They told us who were standing behind the guards to take our blindfolds off. I tried to control myself but couldn't bear what I was seeing. They brought those who were to be executed and put them a few yards in front of the guards.

Q- How many were to be executed?

A- On my left, I counted 7 or 8, on my right there were many more as far as my eyes could see.

Q- Were there men and women together?

A- Yes they were

Q- Did you guess their age?

A- Yes where I was standing there was a man standing next to a girl and next to her was a young boy, he was really a kid, the girl was young too, she was wearing a headscarf, I couldn't say how old she was exactly. Three of the four [Witness breaks down in tears, complete silence in the room]

Q- Can you continue?

A- [witness composes himself] Yes..this scene has remained with me for 28 years. I saw two more, who couldn't have been older than 15.  There was a girl whose voice was shaking as she hailed her political organisation.

Q - What happened next? Can you describe it?

A- They told us to walk up to the guards. They told us to put our fingers on the triggers, I did as they told me, they recited the Koran, they then ordered, Fire! and shots were fired. One of the Guards came towards me and said, 'why did you not fire?' I stepped back. Someone walked up to the  bodies on the ground and did the coup de grace. There were many who were executed. Repentant prisoners who didn't go forward to fire, were told to pick up the corpses and put them in the back of a truck. Two at a time were picking the bodies from their hands and feet and throwing them into the back of a truck. They took us back in the mini-bus. We were not blindfolded, we were all dazed and shocked. Some had blood on their clothes because they had picked up the bodies.

I am a religious person and have religious convictions. When I was doing my prayers afterwards, only God the Almighty could understand what I was going through. I cried so much during my prayers that I don't remember what happened to me after. Since then, I have erected a wall all around me, and I have kept myself behind this wall ever since.

Q- Is there anything else you would like to add?

A- What happened to me was like an emotional rape. Like other forms of rape, it sits so deep inside your soul and emotions that it never heals. I had become an accomplice in murder, my hands were stained in the blood of another human being, I had assisted the murder of a freedom seeking human being, I will bear this pain for ever.