The Offensive Cartoon in IR Publication 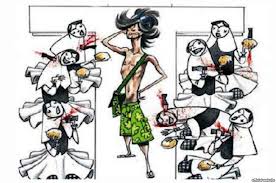 Yet again another cartoon has offended religious sanctities and sensitivities. This time however, the cartoon was published in an Iranian hardline publication, the monthly Kayhan Caricature.

The cartoon depicts the biblical Joseph, also revered as one of God's prophets by the Muslims, as a half naked effeminate cat walk model in a fashion show, watched by infatuated women besotted by Joseph's beauty.

Just as in the biblical story, the infatuated women watching Joseph on the stage are holding a knife and an orange, but distracted by Joseph's handsomeness are not realising that they are cutting themselves with the knives instead of peeling their oranges. To make sure there were no ambiguities left as to what the cartoon is about, the caption for the cartoon read, "Zuleika Fashion Show". Zuleika is known by Muslims as Potiphar's wife who wanted to prove to her aristocratic friends how handsome Joseph was.

Yesterday the publication was shut down because of the offensive cartoon and the 'accountable manager' for the monthly apologised for having published it.