A Nightmare Even Worse than the Islamic Republic 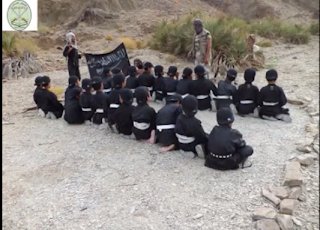 Looking at the group's websites and videos on the internet suggest this is an Al-Qaedeh like terrorist unit, most probably financed by the Saudi blood money.

The picture on the left shows Jeisholadl training young children for their idea of Jihad.


The idea of financing and using such groups, as Jeisholadl, to repeat the Syrian tragedy, even on a small scale in Iran, is so repulsive that it will only serve to unite all Iranians, for or against the current regime.

The ruling Ayatollahs in Iran should appreciate the main stream peaceful civil opposition that they face in Iran as a responsible opposition which wants nothing other than peace and prosperity for all Iranians. To further clamp down on the mainstream opposition in Iran will only breed more terrorist outfits such as Jeish-ol-Adl, a prospect that no patriotic Iranian wishes to contemplate.