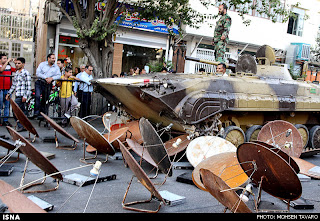 When Rouhani was the guest speaker at the Asia Society and Foreign Policy Relations, he was asked if people in Iran were allowed to watch satellite channels in Iran?

He smiled and replied with one of his clever statements that are neither false nor tell the whole truth, by saying "In Iran everyone has easy access to satellite, you see satellite dishes even on the roof tops throughout the Iranian villages'.


Of course the true answer is that owning satellite dishes and satellite receiver equipments in Iran is illegal and the regime makes it even more difficult by jamming signals both locally and at source, but the public are so fed up with the nonsense which is aired from the state TV that they risk the punishments and try to watch the satellite channels despite all its possible dire consequences. 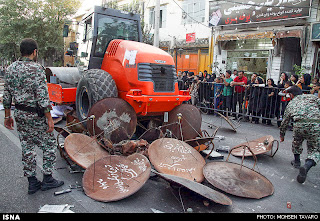 And interestingly just when Rouhani was pulling the wool over the eyes of his American audiences, tanks and bulldozers in Shiraz had come to the streets to crush people's confiscated dishes and receiver equipments. 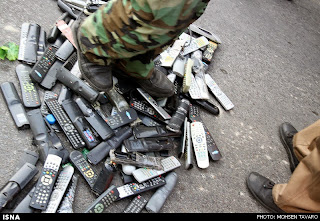 and of course "Death to America" written on an American flag marked with foot prints on it were part and parcel of the festivity: 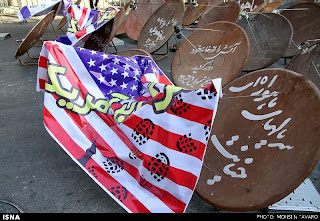 The charm offensive will fizzle out as soon as the true nature of the regime is exposed. Hypocrisy mixed with PR will not work.

Again - the only change of the Regime is just the cynical & cosmetic one! Any talk of US concessions merely the cue for the Regime to simply gloat and spit right back in Obama's eye! Khamenei's mobster and Gestapo mentality would sooner hail petty propaganda victories than pursue any serious attempts of change.