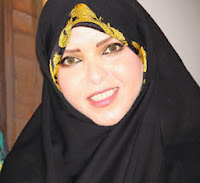 Khomeini’s grand-daughter, Naeimeh Eshraghi, shut down her Facebook page, after a vulgar joke by her about Iran war martyrs, caused an uproar on the Iranian cyber space, notably amongst the children of war martyrs.

Two of Khomeini’s famous sayings during the war were:
“Revolutionary Guards should marry the widows of their fallen comrades, so as they were not left without guardianship” and “I wish I was a revolutionary guard”.

Word quickly spread that Naeemeh has left a comment via her Facebook account, saying 'sometimes we used to joke with our grand-father by combining the two statements “Revolutionary guards should marry the widows of their fallen comrades, so as they were not left without guardianship. I wish, I was a revolutionary guard” ‘ 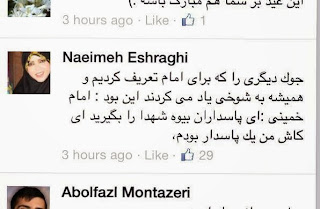 Son of Ibrahim Hemat, a distinguished war martyr, wrote “when the children of this country were being blown to bits with bullets, bombs and mortars, the leader of the country for whom many had sacrificed their lives, was making vulgar jokes..”

Previously Naeimeh had got in trouble for photoshopping her daughter’s picture and exaggerating the award she had won. More recently Naeimeh had posted a picture posing with her red boots, saying how much her grand-father liked happy colours and hated the colour black, encouraging all the girls in the family to wear brighter colour dresses.
Posted by Azarmehr at 8:30 PM