"Hang them in Public During the Friday Prayers" - Hasan Rohani 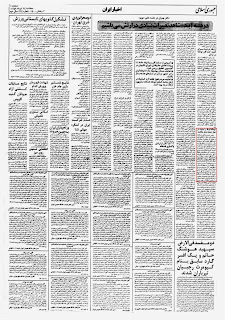 This picture on the left is a newspaper clipping of the Islamic Republic Daily, dated 15th July, 1980. It is six days after a plot by a group of petty officers to overthrow the mullahs in Iran was discovered and hundreds of suspects,  some of Iran's finest military officers, had been arrested. How the plot was compromised is still not fully clear. The planned military coup never took off the ground and the plotters did not fire a single round. Just about all factions at the time from the Soviet puppet Tudeh Party to the MeK claimed credit for having alerted the authorities about the plot. Around 200 of Iran's finest officers, pilots and paratroopers were executed as the consequence.

The headline quotes Mostafa Chamran, Iran's defence minister at the time and a veteran of PLO training camps in Lebanon, promising fundamental changes in the structure of Iran's armed forces.

There are also some chosen quotes in the highlighted box in the middle of the article. One of the quotes is by the Deputy of Semnan, i.e. the "Moderate" Hasan Rouhani, the current president of the Islamic Republic of Iran. It simply says:
"Hang the plotters in full public view during the Friday Prayer sermons".

Just to add a humorous note at the end,  UK Peer, Baroness Williams of Corsby, regards Hasan Rouhani as a "Liberal Internationalist".
Posted by Azarmehr at 4:05 AM

we all know this man Rouhani is a fraud, phony, fascist and a disgusting figure. His son was so
embarrassed that he committed a suicide! The problem is the usual forces out there (useful liberal idiots, peaceniks, islamists and oil conglomerates who do not see anything except $ sign in front of their eyes want to sell this guy as a moderate and shove it in our throat so they can continue with their hold on power, rape and looting of Iran.

Thank you all for correcting my mistake with the year. 1359 was the Iranian year of the publication and for some stupid reason, I had put down 1959 for the year converted in Western calendar. My sincere apologies