How to Deal with a Nuclear Explosion Islamic Republic Style 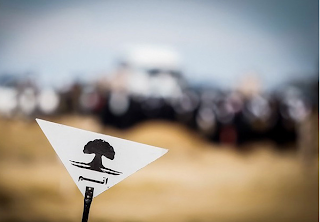 What will happen, if God forbid, there is a nuclear explosion in the Bushehr nuclear reactor? Iran straddles a major geological fault line, making it prone to seismic activity, hence ensuring any nuclear plant's safety in Iran, is a top priority concern.

If this has ever been one of your concerns too, then fear no more, for the Islamic Republic's emergency forces are more than adequately equipped and trained to deal with such a disaster.

See below, pictures of special exercises or as the Islamic Republic authorities called them, "Bushehr Nuclear Explosion Readiness Manoeuvres"

The fire fighting sisters dressed in their presumably radioactive protection providing chadors, will ensure no females working at the plant will have their heads uncovered if they escape the explosion.
The strip with the mushroom cloud sign, seen below, will alert everyone where the radioactive affected areas are. 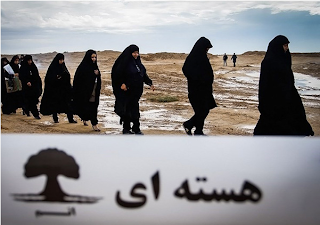 Latest technology fire fighting equipments, like the shovel seen below, will be used to put out nuclear fires. There may be some collateral damage as seen in the picture, with the person using the shovel throwing some earth on the person standing behind. Special face masks will be provided but wearing them will be optional. 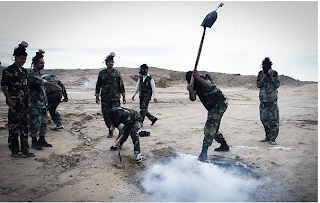 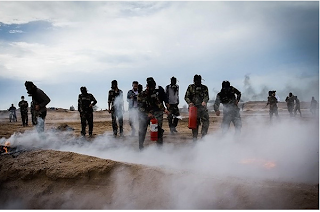 Below, what appears to be a suicide fire fighting sister, runs towards a nuclear fire to martyr herself for the Islamic Republic. 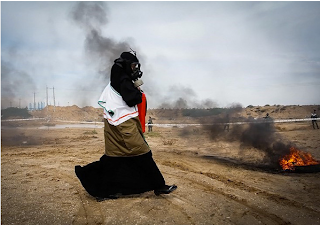 Two Baseej brothers help each other with securing the nuclear perimeter zone. The challenge is to attach the strip to the mushroom sign previously secured safely in the ground by the Russian scientists. 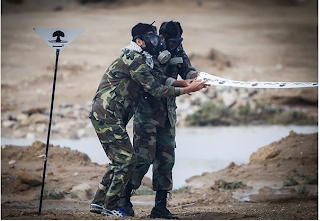 Oops! There is one brother caught by surprise as the nuclear fire engulfs him. The surgical mask worn by the Baseej brother should prevent him from inhaling the harmful smoke. 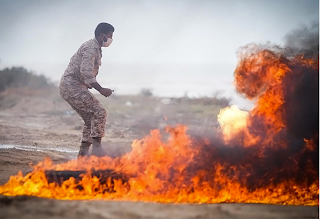 Well there you have it. After a hard day of Nuclear Readiness Exercise, the sisters march off for a well deserved drink and and friendly frolicking with the elite Baseej brothers, having saved millions from a nuclear disaster. 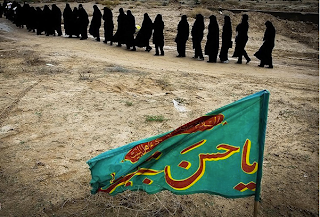 The real efficiency of the Islamic Republic has never been in saving lives but in taking lives.