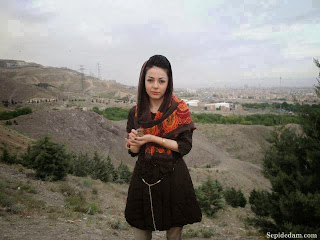 The 17 year old Avian, an Iranian girl from the village of Hanjalieh in the Kurdish region, went out hiking and sightseeing with her brother and her fiance, outside the town of Baneh last Thursday.

On their way back, the Revolutionary Guards dressed in plain clothes, suspected the couple of being smugglers and opened fire on them without giving a prior warning.  The bullets hit Avian in her legs and in her back. She died two days later in hospital as a result of her injuries.

Avian and her fiance were due to get married today.

Avian in Kurdish means Love. Once again they murdered love in the Islamic Republic. 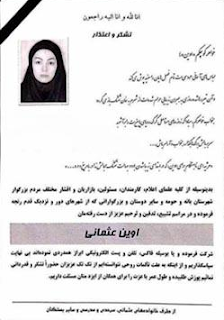 This flyer which was stuck on the walls thanked all the people who turned up for Avian's funeral. It started with this poem:

"My little sister, Avian,
Your heavenly white wedding dress
made all our seasons shine so bright
and that bullet that was shot towards you
will one day go back towards the barrel it came from
to compensate your wasted beauty
Sleep my little sister,
so that the howling of the wolves
Does not disturb your autumn sleep
Put your head down and sleep well"
Posted by Azarmehr at 12:48 AM