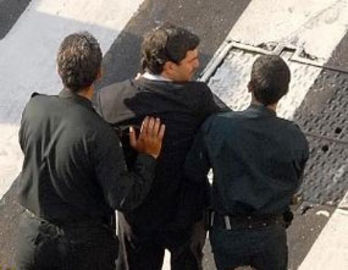 He is Mossavi Khoeini, being taken away by Islamic Republic agents. This was one of the unforgettable pictures when the regime showed its heavy hand on a small gathering of women in Tehran, two weeks ago. Since this picture was taken, the whereabouts of Mossavi Khoeini is still unknown. It is heartbreaking to imagine what he is suffering now at the hands of his interrogators.

If there was one reformist with real guts, who stood up for all of the Iranian dissidents, it was Mossavi Khoeini. He was the one MP who did what he could to make a difference for Iran's political prisoners.

If there was a just cause for protest, Mossavi Khoeini, was there, I mean physically there. He is a man admired by many across the political spectrum of Iranian dissidents, and now he is suffering the same fate as many of those he often tried to help.

Last night's gathering to call for his release brought many of Iran's dissidents together. This is how unity comes about, not in endless Paltalk chatrooms or in Hotel conferences outside Iran, but on the ground.

Imagine what a big moral boost it would have been for those in the gathering if the Swiss government had arrested judge Mortezavi last week, when the Candian government asked the Swiss authorities to do so for the murder of the Canadian photo-journalist, Ziba Kazemi.

There were no protests from the European Left for the presence of an evil judge who has caused so much death and misery in Iran. After all, Judge Mortezavi in the eyes of the European Left is probably an anti-imperialist. Had it been President Bush, they would have organized themselves fully for widespread protests.

Shirin Ebadi didn't attend the gathering last night but sent a message of solidarity. Lets hope next time Ebadi gets an international audience, she mentions the plight of Mossavi Khoeini too and not just the Guantanamo prisoners.
Posted by Azarmehr at 10:38 PM

What do you think of Ganji?

I have written about Ganji before and had a CNN interview when he was on hunger strike too. I think he is someone who took part in teh revolution with exceptional revolutionary credentials, but saw the errors of his judgement and turned against the Islamic regime.
For any regime to collapse it needs to start disintigrate from within. We should help that process.
I wouldn't follow Ganji personally but whatever he does against the Velayat Faqih system, I will try to support.