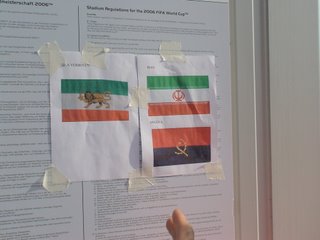 When Hanif Leylabi left a comment on my blog describing how some of his relatives in Germany were told by the German Gestapo police they were not allowed to take the Sun and Lion flags inside the stadium, I got really curious. I contacted some of the people I knew in Germany and made more enquiries. Well here is the evidence of what Hanif was saying. In clear Vaterland Deutsch "Sun and Lion Verboten" notices at the stadium entrance.
It looks like the NPD Nazi fans of the SS-lamic Republic still have a lot of sympathisers within the German police force.


But not to worry, here is one umbrella and one flag that got past the NPD police. 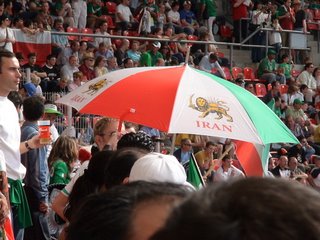 Stupid regulations. Well, atleast that explains it all.