No Other Flag Other than the Sun and Lion 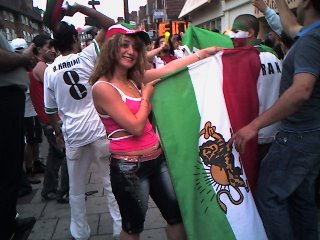 We decided to go and watch the Iran v Mexico match at a pub in North London. With a convoy of 4 cars all packed to capacity and Sun and Lion flags sticking out of each window, we cruised down the streets of North London. Most people were confused who we supported, some asked us if that was the Dutch flag, as Holland had just won the match in the afternoon :)
I wondered to myself if there would be any dim wits waving the Islamic Republic flag when we get to the venue.

fortunately, we saw only three Islamic Republic flags and the rest were all Sun and Lion flags. First one was a young boy with the IRI flag draped around him. I approached him and asked if he thought there was anything Iranian about the flag he had put across his shoulder? He said ashamedly "I know, but I just didn't have any other flag". I told him but brother thats no excuse to wave this. He gave me the IRI flag, and I bought him a drink, shook his hand and embraced him like a new found friend. 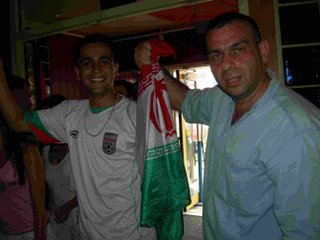 The other two with Islamic Republic flags were both females and the women in our group approached them. One of them was a young girl in a short skimpy skirt and a low cut blouse, looking even more stupid as she flapped the Islamic flag about. She folded up her flag and put it in her hand bag and the other woman exchanged her Islamic flag for a Sun and Lion flag. Now I could relax and enjoy myself.

The sun was shining majestically and the Iranian girls were looking more beautiful than ever. 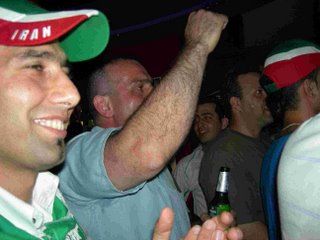 I let the pictures tell the rest of the story: 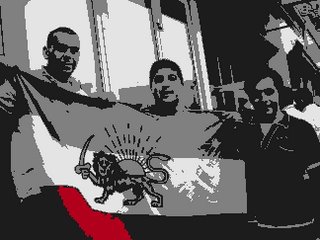 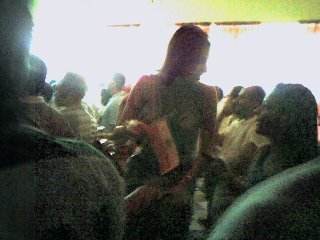 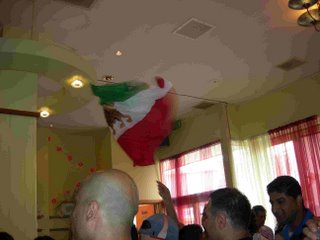 Finally all that heat generated form all that excitement blew up the projector's bulb :) and we had to watch the rest of the match on small screens :) 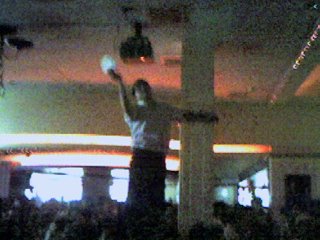 And as usual there were no figures of "Iranian opposition", who appear all over our media, in the crowd. It is beneath them to appear where Iranians gather. They were probably too busy writing articles and poetry or organising useless conferences than to mix with the plebs.

Too bad we lost!! Huge embaressment...did you read the latest news that idiot/Islamist supporter ALI DAIE recently told foreign reporters!? Iranian women should not be allowed into the stadium's because of the "bad atmosphere"!!!

Are women inferior creatures that should be covered up from the preying eyes of muslim men and not be allowed to make decisions on their own!?!

You write, "And as usual there were no figures of "Iranian opposition", who appear all over our media, in the crowd. It is beneath them to appear where Iranians gather. They were probably too busy writing articles and poetry or organising useless conferences than to mix with the plebs." I know of four gatherings in London. Surely you do not expect them to have turned up where you were. Be a bit more fair next time....please
Guess who? :>

I don't who you are?! How am I supposed to guess who? All I know is that the ordinary people will not recognise any of you, because you keep to your own circles.

I didn't read that but what do you expect from someone who had the supreme leader wed him and is a business partner with Rafsanjani?

Its all IRI flags according to the BBC report from Nurenberg

You make me proud as an Iranian and you just made my day brighter.
Well done, keep it up and I wished there were more Iranians like you. Also I wished we had a Potkin in Nurenberg, Germany too!
http://www.bbc.co.uk/persian/sport/story/2006/06/060611_si-iranianfans-nuremberg.shtml
Those Iranians who cannot use their brain cells make me sick!

Regarding your statement that Iranian opposition figures didn't show up, I would have to disagree.

The Iranian Football Federation reportdely recieved 1/3 of the tickets to yesterdays game, yet only about 5,000 of the fans were Iranians....seems to me like Iran didn't want any fans showing up. Couple that with NO flags besides IR and those stupid flags with just Iran written on it, then I would say IR sabotaged this one to make sure no opposition could show up.

I think they learned their lesson in 1998 when MKO had thousands of Rajavi shirts in the stands.

Please look into this if you can.

I was in my university bar. The Iranian society (mostly international students) were holding an official Iranian flag. I wouldn't call them cretins as I understand why many Iranians fly it, as it is the only flag they've known and have an irrational loyalty towards it (that's what nationalism does to you!)

The lion in the one in the pic on your latest post is soooo lame. It's the same as mine. I want the proper sharp golden one, not a weird friendly yellow lion.

BTW- We should petition a letter to sack Ali Daei and kick him out of the Team Melli sooner than later.

You are right Hanif, I do have a sharp golden lion image. What I normally do is buy a Hungarian flag which is red, white and gren instead of green, white and red with nothing in the middle, then I transpose the sharp lion image by applying the iron. It is labour intensive however and as soon as I make one, someone wants it. I should do more.

To "a concerned Iranian" - My friend, the Iranian "opposition" should have been there to talk to those who were unknowingly and unwittingly carrying the IRI flags. See the BBC pictures look at the girls in skimpy dresses with no veils they are not IRI supporters they just dont know the symbolic consequences of what they do. The "Iranian Opposition" should also have been there handing out thousands of Shir-o-Khorshid flags.

They cant just write articles on the internet, they need to go amongst the people and educate them

I wonder if the Mojahedin will have a presence at any matches like they did at the Iran-USA Match in '98. There were many sheer o khorshids then.

Oh yeah Hanif, the Mojahedin had a similar policy to SWP. They had a very Marxist interpretation of Islam and they co-operated with the fundamentalists, tried to remain in their favour and justified it by saying the mullahs are anti-imperialist, finally they got slaughtered. You want to go down the same route again?

Nearly everyone was part of the revolution and many people suffered in the Islamic counter revolution.

It was onlysupporters of the tyrant Shah who wanted to keep that oppressive system in place.

Listen to my argument Hanif, dont go off at tangent. I am saying all these groups the MKO, The Tudeh, .... tried the path that SWP is taking now. Why do you want to take a path that has already failed many times over??

Also who was more of a tyrant the Shah or the Mullahs?

Can you not for once see that there was two dictatorships in Iran, a political one and a religious one. Most intellectuals were too afraid to tackle the religious one and instead thought all the ills were becauseof the political dictatorship. They were wrong, the problems of Iran,Afghanistan, Iraq, ... are predominantly due to the religious dictatorship the society suffers from.

The situation was totally different.

Khomeini lied to the Iranian people about the headscarf and about democracy. They voted for peace and harmony when they voted for Islamic Republic, not public stonings and floggings. They were all fooled.

you can design a flag with lion and sun without sword.

this is my idea for flag of iran

As usual you dont answer my point you just start a new thread. In any case now the likes of SWP are being fooled by Islamists

You are absolutely right about the sword. We dont need the sword, the Sun and Lion is all we need.

Don't you know? The sword was introduced just to keep the mullahs happy, saying its Ali's sword.