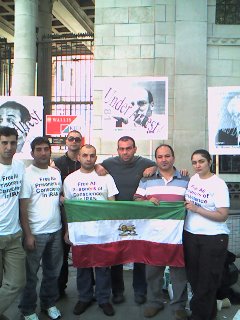 It was the last day of the hunger strike in London, which took place in solidarity with Iran's prisoners of conscience.

Those who took part in the hunger strike had two common denominators. They were Iranians and they wanted to see the prisoners of conscience in Iran set free.

Whether they were republicans, monarchists, Left or Right, they respected each other for the hardship they put themselves through to publicise Iran's political prisoners of conscience.

Today there was also a pleasant surprise call from Reza Pahlavi. He spoke to most of the participants on hunger strike. Monarchists or Republicans, it didn't matter, they were more than happy to converse with Reza Pahlavi on the phone.

What they all admired was that Reza Pahlavi backed any unified action in support of all of Iran's political prisoners, irrespective of who had called for it. Unlike some others who made five minute appearances and were quickly interviewed by the BBC Persian Service outside the Bush House and then quickly left, Reza Pahlavi wasn't after scoring political points for himself. What mattered to Reza Pahlavi most, was that we were standing side by side for a common goal, helping to create an Iran where no one will be harmed for their views.

Iranian political figures who are constantly being interviewed by Persian media across the world and are stuck in the same old useless discussions relating to more than a quarter of century ago, should learn from the rank and file who made this hunger strike possible.

I will have more pictures soon.
Posted by Azarmehr at 10:25 AM

Thanks Potkin. Keep it up. Best.

Reza Pahlavi has done this sort of thing before. He's a class act and he really cares about the future of Iran and its people.

Thanks for the report.

I feel sorry for you. PLz ask your GP to refer you to a Psychiatrist.

Good Luck with your treatment.

Best wishes for your mental and physical health

Anonymous said...
This comment has been removed by a blog administrator.
3:37 PM

dear "anonymous" who feels sorry for Potkin,
you will always stay just that; ANONYMOUS!!
tell you GP to refer you to a sex therapist because yoou clearly havent had it for a while.

potkin jan
tanks for such a punctual report.i was there myself, for three days, if some one would asked me what was happening there i would say exact samething that you wrot on your report.

I am not surprised at the unqualified support that H R H Reza Pahlavi gave to this hunger strike, but what baffled and disappointed me is the lack of support that the Persian (Iranian) Diaspora gave to this movement at such a critical junction in our fight against the Taleban in Tehran

Relatively speaking it was not bad. More than 20 people gave up solid food and slept in the street overnight outside the BBC Persian service instead of enjoying the sunny weekend with their families. This must be appreciated.

Dear Azarmehr,
While I appreciate and support all those who joined Mr. Ganji's efforts and his call for a hunger strike to highlight the plight of the political prisoners in Iran, I just wanted to point out that when one is sleeping with the enemy, one has to always try to keep one eye open and beware of the dengers that might creep up in the dead of night, while we are nicely tucked in.
The general silent majority of the Iranian Diaspora, have gained an invaluable fifth sense regarding how much and who to trust and I suspect that they are more in the right than they can be considered as too conservative in their points of view.
Please see the answer that Mr, Ganji had given in response to the number 6 question which was asked from him at his last meeting in London.

Fereidoun
The reason the Iranian Diaspora did not turn up in huge numbers is because although they may be supportive of the views, they do not wish to associate themselves with some laat and loot. Get my drift?

I don't know what came of it but it is better to try and fail than do nothing and live in a prison of inaction. IF any one of us were in prison for no reason we would hope that someone would be moved to take some action on our behalf. x

Reza Pahlavi is as weak and incompetent as his father.

Give up for god's sake