When you speak to people who have left Iran, their most vivid memories of Iran are always their last days. My last days in Iran happen to coincide with the onslaught on Iran's universities duringthe time the clerics and their supporters refer to as "cultural revolution".

I witnessed the lowest of the lowest thugs and common criminals who had been organised by their paymasters to break heads, club, stab and maime the best sons and daughters of Iran. Too many times I witnessed most of these thugs could not even read or write, for they could not decide what to do with posters and notices in the university which did not have pictures or emblems. As a young teenager at the time, I thought to myself, "My God, these thugs, these criminals who can not read and write are telling our students and academics how a university should be run!" - tofoo bar tow ey charkhe gardoon tofoo!

For three days, I witnessed and participitated in running street battles with these thugs. Everytime the pavement bookstalls in front of the Tehran university were attacked, I helped the booksellers pack and lock their books in their metal containers or simply carry them away. I did not care what books they sold, I just thought a book is for reading not for burning.

On the last day, the thugs got the fire cover of the revolutionary guards too. I decided to run and grapple with my conscience later. When I got home, I could still hear the shooting and a constant incomprehensible shouting by the people. I sat on the steps in our yard holding my head in my hands, re-living the scenes I had witnessed. I envied the bravery of those who had stayed on till the end.

[We were just teenage kids facing thugs in street battles. what chance did we have?]
The next day, I regrouped with some of my friends. Some were missing and we checked the lists of injured in hospitals but to no avail. Then we decided to go to the Tehran university. The president at the time, Bani-Sadr and the clerics, were holding a victory meeting in the main campus. Workers from 'Iran National' factories were bussed into the event. As they got out their busses, they were told to shout, "Bani-Sadr, Karegar, PeyvandetAn MobArak" - "Bani-Sadr, Workers, Blessed is your Union". And then others in the crowd would shout, "dAneSgAhe tAghooti ta'atil bAyad gardad, dAneSjooye vAbasteh exrAj bAyad gardad" - "Universities of the previous regime must be closed down - Students with ties to foreigners Must be Expelled".

[universities in the hands of armed hoodlums]
What ties with foreigners? we had no ties with anyone, we just wanted a better future, where no one told us what to think.

I looked at my friends, we could all see defeat in each other's faces. The night before we knew we were losing the battle, but we thought the people of Iran would realise that it was wrong to close the universities. What a blow to out moral! Not only we had lost the fight the night before, despite all our efforts there seemed no backing from the people for us either. Surely the people of Iran could not be that stupid, I thought to myself.

As we watched with grim faces the parade of the victors, a petty hoodlum looking guy with a few of his cronies around him, pointed at us and said "These lot were with them last night too." Without looking intimidated, I asked him shaking my head sideways, "Who was here?". He looked happy to have found some more victims "You lot, I can tell". He said smiling.

- "How is that?" I asked him, fearing that he may well have seen us the night before.
- "I can just tell by looking at you" he replied, with his cronies looking eager to get the attack command from him.
- "no fellow, you are wrong" Still trying to look undisturbed and not bothered. Then I turned my head and watched the rest of the sheep march past. I was biting my lips but I was hoping the rest of my friends do that and not even glance back at this guy. Luckily they were clued on and we all turned away from the petty hoodlum looking guy, and luckily the guy must have concluded there wasn't much to go on here and left us alone. Enough was enough for us though. We decided that it is best not to hang around much longer, just our looks made us stick out like a sore thumb in that crowd.

In the evening, I watched Bani-Sadr's victory speech in the university on the State TV. Rows of clerics were sitting on both sides of the pathetic president. Both the clerics and the president were full of themsleves, looking at their smug faces one would think they had just won the Third World War. I hated Bani-Sadr so much. This little creepy weasel who lied about his academic qualifications and pretended to be an intellectual, whicle making ridiculous statements such as "A special ray radiates from women's hair that sexually provokes men". Now he was gleaming that he had closed down Iran's universities.

He announced the closure of the universities for the next two years, until all the syllabus and the course contents were re-written again according to Islamic principles! Those academics deemed non-Islamic were expelled along with troublesome students. When the universities were finally opened, apart from the normal academic entrance exam, there would be religious tests and forms to fill too. Questions like, "Has anyone been executed in your family?"

That's it! I thought we lost. Game, set and match. I was convinced that the next generations of Iranian students will be so badly brainwashed by the Islamists that Iran's universities will just churn out some sheep brain graduates.

How wrong I was! Almost two decades later on July 9th, the generation that we predicted would be brain washed, came out in their thousands and shouted "Freedom of Thought, For Ever, For Ever"

For the next 5 days, we followed the news every minute of the day. For two days we rang and rang and complained to the BBC. "Why are you not giving coverage to whats happening in Iran?". The news from Tabriz, my birthplace, was grim. There the students were more brutally put down than anywhere else. Neshat newspaper in Iran reported with big headlines, "Student Unrest Spreads to 19 Cities Across Iran".
Finally even the BBC gave coverage to the story, although on the fourth day, it referred to it as mob rule! I talked to my friends that were with me during the "cultural revolution". We were all convinced that the regime will soon crackdown and will not let the situation go out of hand any longer. This happened on the sixth day. 2000 students were arrested in one day. Soon the kangaroo courts started dishing out long term sentences. Ahmad Batebi, who was pictured on the cover of the Econmist, got sentenced to execution first, and then it was commuted to life.
I made contact with Barbara Smith, the then foreign editor of the Economist. She was shocked and checked and confirmed the news with her own sources in Iran. Reuters which had the rights to Batebi's pictures waved its loyalties and let us have a copy of the high resolution picture so we could print Batebi's pictures on T-shirts.

I was invited by the Campaign for Free Education to speak about the student movement in Iran. The audience then recommended Batebi as a candidate for the symbolic position of the honorary vice-president of the NUS. In March, Batebi was unanimously elected by the NUS for the position. Previous holders of the position were people like Tasleema Nasrin and Nelson Mandela.
We all feared a return to the executions of the 80s. This time we were determined to do as much as we could so that were the Islamic Republic repeat the massacres of the 80s, she would pay a hefty price for it.

The Student uprising of 9th July, above all, was a reminder to those who want to imprison thought, that it is a futile attempt. Freedom of thought is like a basic human right. People will want it, sooner or later. 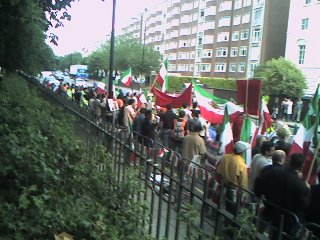 Commemoration of July 9th Student Uprising
Outside the Islamic Republic Embassy in London
on Sunday.

Would you write about Ganji and his personal politics?

I am not going to do or say anything to harm this international hunger strike planned for this weekend in support of Iran's political prisoners of conscience. Lets wait till after that but already I have a lot to tell. I am just biting my lips for now.

The West hasn't been showing much about the unrest in Iran. They haven't even talked about the anniversary of the student uprisings! The only coverage I read was in the new York Sun, which had an article on the hunger strike and student uprisings. It's very sad.

I watched Mr. Ganji on the VOA last week. He demanded criticism instead of praise. Here is a little bit: When a question regarding RP came up, he decided to recite the egalite fraternite and liberte speech... But when someone compared him (negatively) to Imam Ali, his response, literally was (in my translation): "I am not even [as worthy as] the ground [khak] beheath His feed." What this emphasizes a certain in-equal stance towards a man who is not even Iranian... but you see, this doesn't matter in this version of the olde eqalite fraternite liberte...
He also went on to say something about a teleological line of progress to be drawn from the constitutional monarchist democracies in Europe and their republican neighbors and partners... Meanwhile he wants to invite not to bring any divisive signs to the demos and limit ourselves to emphasizing three prisoners handpicked by his own authority - which is in turn gained as result of his para-martyr ethos...
I want unity as well...
I just hope he recognizes that he doesn't have all the authority in the world. He is good, but he is not the only one; and he seems very certain of his own righteousness - as evident in the repeated celebrated "manifestos." Like I said before, this does not, perhaps inadvertantly, lead to unity and solidarity.
I wish he would stay abroad a bit more before deciding to take things "ye taneh."
I am willing to hope for best.

Then on Monday, I may have a few things to say....

I am looking forward to what you have to say Azarmehr. I also have a lot to say for a man I have already lost my respect for.