If You Want Forgiveness 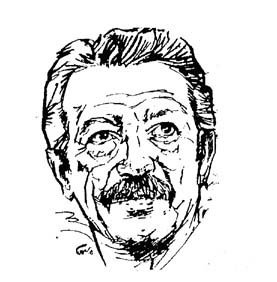 I have finally got my new service providers talktalk to connect me to the internet. It was so frustrating, August 6th was the anniversary of the murder of my political mentor, Shapour Bakhtiar, and yet I could not write about it in my blog.

I heard an anecdote on VOA's special program on Dr. Bakhtiar from their reporter in Paris, Mohammad Reza Shahid. I had not heard it before and thought it would be nice to share it with others who may not have watched the program.

After the Islamic revolution, the zealot revolutionaries, ransacked Shapour Bakhtiar's home and destroyed all his books from his extensive library by burning them. Years later one of those zealots who had ransacked Bakhtiar's home, fled the Islamic Republic and seeked asylum in Paris. Repentant by what he had previously taken part in, he contacted Dr. Bakhtiar to express remorse and seek his forgiveness. Dr. Bakhtiar had replied "If you want forgiveness from me, all you have to do is read some of the books you destroyed"

What a great man, Shapour Bakhtiar was. I am forever proud to have been his supporter.
Bakhtiar was murdered by the orders of Hashemi Rafsanjani, the darling "moderate" of the European press, and by the assistance of a spineless Socialist French president, Francois Mitterand, who valued business contracts more than principles.
Posted by Azarmehr at 5:23 AM

what a shame Iranians didn't hear him during the turmoil of 1979.

I have no doubt in you sincere patriotic feelings but it is always easy to forget important facts. One such fact is the disgraceful bonding of Mr Bakhtiyar with the Saddam regime in Iraq. Bakhtiyar set up his headquarters in Baghdad just as Iraqi soldiers were aiming to repeat the "Qadesiye" of early Islam against Iran. He set up a radio using many figures currently appearing in Los Angles TV's (Meybodi, Sur-e Esrafil, etc). This is high treason by all accepted international norms. We should all read more before comming to damning conclusions.

Unlike the MKO, Bakhtiar made no obligations to Saddam. When Iraq started the war against Iran, Bakhtiar quickly condemned it and had nothing to do with Saddam. Simply put, Bakhtiar took the money and did NOTHING in return for Saddam. He was also quite open about the money.

We have to be realistic, you can not fight a regime with billions of petro dollars, with membership fees and pocket money. No one will be able to bring about change on a shoe string budget and no one has in the recent history.
What is important is what obligations you give in exchange when you take the money.

What you say, was important to me at the time too, but it is important that we stop being romantic and start getting realistic.