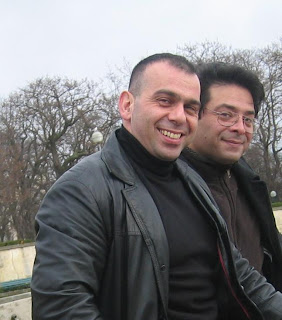 I have been friends with Siroos Malakooty for several years now. Siroos is one of those people who I refer to as "having inherited Left wing genes" :) He will always have a Left wing accent and a Leftist view of the world. A good thing too, for it would be a boring, bland and monotonous world if we all looked the same, talked the same and thought the same.

Conversations with him are always interesting and challenging and I always learn from him. Despite our differences, we also always find a lot of common ground.

I had a chance to meet him in Paris yesterday after several months. Siroos is a classical guitar soloist and founder of Artists Without Frontiers. A stroke few years ago, resulted in Siroos not being able to raise his left arm above his shoulder, which has stopped him from playing classical guitar.

Siroos presents a program on Tishk TV, which is run and funded by the Democratic Party of Iranian Kurdistan. I was glad to find him in his usual high spirit. I wish him luck in his endeavours and hope he will contribute towards our common goal which is the well being and prosperity of human beings everywhere.
Posted by Azarmehr at 3:38 AM