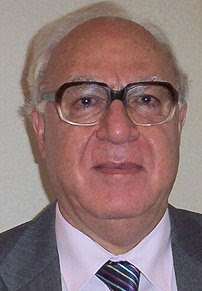 I just managed to get to the last session of a seminar on broadcasting to Iran, organised by the Next Century Foundation. The four panelists included former Iranian diplomat Mehrdad Khonsari, Foreign Office Spokesman Barry Marston, Journalist Nazanin Ansari and Oxford academic, Farhang Jahanpour.

I had never heard of Farhang Jahanpour before, but it wasn't long before he got into the meat of his speech that 'I got hold of the telephone receiver- gooshi dastam oomad', as we say in Persian, meaning I understood where he was coming from. Later when I got home and googled his name, sure enough it confirmed my radar for these kind of people is still well and truly tuned in. Amongst many pages that came back by the search engine, just being amongst the supporters of Iranians for Peace, a CASMII type sister organisation, was enough to confirm my trusted gut feelings.

Jahanpour started by saying how the 1979 Islamic revolution was so unpredictable for him and how he himself was surprised to be targeted by the militant students at the time as being an 'agent of Zionism'. In other words he was just as out of touch even then when he was in the middle of it all not to see the writing on the wall.

Then shortly after, the familiar script used by these people followed which starts off by talking about the greatness of Iran, the achievements of Iran in the past, the educated and cultured people of Iran etc. which no one can argue with but then suddenly while everyone's guard is lowered, discreetly equate all that with the current Iranian regime.

'When you impose sanctions and you talk about carrot and stick, the Iranian people equate carrots and stick to being called a donkey'. What? So what happened to those educated and clever Iranian population? Surely they can distinguish between what is aimed at the regime and what is aimed at the people, or is it just his ilk who constantly try to blur the two distinct entities of Islamic Republic and Iran?

'If you keep threatening to invade Iran for three decades, the Iranian people will stand up to you. Its time the West accepted the Islamic revolution as a fact.'
What? Who has threatened to invade Iran? All US administrations since the Islamic revolution have gone over board to appease the Islamic Republic. High ranking US offcials referred to Khomeini a saint or as Iran's Gandhi, Madelene Albright apologised to the regime about the 1953 coup as if the clerics were the victims of the coup, even Bush's administration only talked about changing the behaviour of the Iranian regime - by using a website! - and not regime change! After 9/11 Jack Straw telephoned Khatami and referred to the Islamic Republic as UK's partner in the war against terror! Even Israel sold much needed arms to the Islamic Republic during the Iran-Contra affair. So who exactly is talking of invading Iran apart from the Islamic regime which is only using it as a pretext to crack down on freedom in Iran and regime apologists who use the threat of invasion to excuse their unwillingness to criticise the Islamic regime as well as the Leftist professional revolutionaries in the West who like using it as an excuse for a demo and a march? Who in Iran is worried about an imminent attack? Nobody!
The fact is Iranians are still pouring into Tehran to live there, they are not running away from there to safer places because they think someone is about to invade. More are worried and more are dying as a result of Tehran air pollution and road accidents than any anxiety about an invasion.

'Iranians look at nuclear power as a source of pride and greatness'
What? Where has this academic been? How many more placards must the protesting workers, teachers, women and students hold which mock the official regime slogan 'Nuclear energy is our inalienable right' for him to realise Iranians want much more basic needs as their inalienable rights.

Are Jahanpour type academics simply confused or is their perception of reality simply a page in the book in their library? The sad thing is they pose themselves as 'Iran experts' and seem to influence the policy makers, yet they have no contact with the people in Iran, their world of reality is the four walls of their library.

After the conference ended, Jahanpour approached me and politely shook hands with me, saying 'I am a victim of this regime, I lost everything after the revolution'. To which I replied, 'So what? lots of people like you have become turncoats just to get back what they lost. ' I wish I knew at the time that Jahanpour was with the CASMII sister organisation, 'Iranians for Peace', so I could have given him another one of his co-members, Dr. Akbar Etemad as a vivid example.

'Iranians look at nuclear power as a source of pride and greatness' is also a good one.

My father told me just last weekend on the phone how this blind striving for atomic power has weakened the whole economy and the job market of millions of people so badly.

What makes this expert an expert?

Dear potkin if he was young man i would tell him grow up .people of iran do not want polotical islamic rejime ,all say we do not want rejime change but behaiver,i tell them in this case we want change of manegment.we say no to velayate faghih and we want rerendum not election.ayatullah kazemini boroujerdi in prison is right and we fully suport him.so we teel jahanpor back off or get ur act 2gether..

Sounds like a donkey to me. If these people are so much in love with this Iranian regime, what the fuck are they doing in US or UK?

And yes, your radar is working fine on my radar. ;-)

They do seem to all have a pre-written script as you have said.

First and foremost, allow me to extend my sincere condolences. Through tragedy we find triumph.

Second, I think you guys need to let up a bit. I mean, I understand your frustration, but the West DOES need to accept the Islamic revolution, just like the new generation of Iranians have.

Now wait, before you start yelling at you computer screen:)

The new generation inside Iran, including the West ALSO need to accept that the Islamic Revolution has failed. And this has real, practical implications.

As expats, you guys need to start getting along a bit better and stop confronting each other because of some organizational ties in their 70s. People change.

There is a common objective now. The revolution failed the moment vilayet-faqih was established, it failed when Khamenei became rahbar, and the icing on the cake: Khomeini's Beheshteh Zahra speech is illegal in IRan!!!

Literally everything he said can be applied to this government, from all the talk about "sarnevesht" to monarchies.

Anyways, I digress, but I think you guys need to let up a bit. Btw, I just got back from Iran.

Have you seen Khatam's website?? His campaign is called Mowje sevom and his commercials are quite developed, you can check them out at mowj.ir He's using that Yahoo idea I had a while back. Someone make me a campaign manager :))

Ever heard of The Devils Advocate?

So much for these so called academics. Perhaps they could take a few leaves out of my book. Let them and all you interested folk visit my blog

I don't understand why my comments don't get published.

Which one was not published? All your comments get published. Don't play that silly game again

It's not a game. It was the first comment I had posted in a while. I expressed my sincere condolences for your loss, and said that through tragedy we achieve triumph.

I also said that you all shouldn't be so harsh to these people just because of their organizational ties decades ago. People change, and if they don't, you should at least give them that opportunity to do so.

Jahanpour is an expat Iranian (who shares common interests with you now), there are many levels on which two capable individuals like yourselves can cooperate, even if you get upset with some of his statements; statements which, quite frankly, I found to be true.

You can use a carrot and stick strategy against Iran, but don't advertise it. Once it is clear that it's being employed the Iranians will react in kind.

Also, it is foolish to say Iran hasn't been threatened with military invasion, explicitly or implicitly. In fact, it would be a "willful suspension of disbelief" to believe so, as Secretary Rice would say:))

Anyways, I think that's everything. I just hate to write it all over.

Thanks for your message of condolence but I can honestly say that I publish every comment from you I receive in my mail box.

Re Jahanpour, I am sure he is a nice man, but an academic should be clever enough to realise the difference between regime and the people.