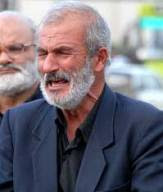 Dr. Zahra Bani-Yaghoub was a graduate of school for gifted children. She had obtained the impressive 23rd position in the overall national exam entrance into the Iranian universities. She was also a graduate of Tehran Medical university.

After graduation, rather than taking up a high salary job, she had volunteered to work in the impoverished poor provinces of Iranian Kurdistan.

Zahra came from a religious family background and her father was imprisoned during the Shah for political activities, but none of this protected her from the terrible fate that was awaiting her in the Islamic Republic.
The 27 year old Zahra was arrested while walking in a Park in Hamedan along with her fiancee by the Islamic Republic's religious observance patrol. The next day, her father was called and told to come to Hamedan. Her father asked to speak to his daughter but permission was refused.

When Zahra's parents arrived at the religious patrol headquarters, they were subjected to humiliating insults. The illiterate thugs told Zahra's father, 'Your daughter is not fit to be a doctor in this country'.
Another religious patrol officer told Zahra's father while laughing, 'If you want to know about your daughter, go to the police station, no better still go to court and no even better still go to the coroner'.
Somehow Zahra while being detained for walking with her fiancee in the park had been killed in custody of the religious patrol. More than a year later, Zahra's family who took part in the revolution still have no idea what happened to their daughter. They were even threatened not to pursuit her case.
In just about any other country, Zahra would be regarded as an asset, she would be protected and rewarded. In the Islamic Republic of Iran an illiterate religious police thug can decide and tell her father 'Your daughter is not fit to be a doctor for this country'
Posted by Azarmehr at 4:33 AM

that just makes me want to cry or yell, i don't know which. I truly believe the women of Iran will be the ones who make the difference. I wish I knew how to get them heard. I wish the MSM would stop blowing smoke up people's arses about bullshit and help. I read an article today in the Times where a woman about Zahra's age was whinging about feminism. Basically it amounted to a giant navel gaze about the fact she wasn't the kick ass successful writer she planned to be so boo hoo feminism sucked and she had kidded herself out of marriage. A lot of old rubbish. And I would rather have read about Zahra.

Typical of an oppressive regime. I am disgusted beyond belief. Hopefully one day Zahra's father can send these thugs to coroner's office himself, in body bag of course.

What glorious fruits has our 30-year-old "revolution" born!