Anniversary of Liberation of Khorramshahr 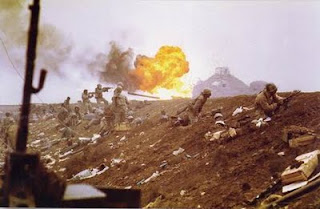 In those days, there was no internet and the best way of obtaining upto date news was by constantly tuning the short wave radio from one station to another. Everyone knew the importance of what was at stake and how it would be a turning point in repelling the Ba'athist aggressors. Iran's once feared professional army was emasculated and a large number of our best air force officers had been executed after the Shahrokhi air base uprising. So much depended on the courage of what was left of the military, the revolutionary guards, the volunteers and the local people of Khorramshahr. It was a test of courage against armour. It was a moment where our differences were forgotten. The only thing that mattered was defeating Saddam's forces.

BBC 'analysts' were skeptic of a quick conclusion, saying making the masses of Iraqi forces to retreat from the city would be a tough nut to crack or something like that.
Finally the state radio announcement that we had all been waiting for, came. "Dear listeners! Dear listeners! Please pay attention!" Our hearts stopped beating for a second, was it good news or bad? "...Khorramshahr, the city of blood - Khoonin Shahr - has been liberated."
The joy from hearing the news is impossible to put down in words. Still we wanted other sources to confirm the news. The tuning knob was turned back and forward so many times that it just came off in my hand and we were left with the annoying crackling white noise you hear in between stations.
I am not sure if I read in the papers over the next few days or how, but I remember how I laughed my head off at Saddam's propaganda machine's claims that the Iraqi forces had taken part in an 'organised retreat, having established all their military objectives!' Yeah Right Mr. Gobels!
This was the best moment to make Saddam concede. He was on his knees and willing to pay Iran compensation. Sadly those who profited from the continuation of the war or had some illusions of expanding the Islamic Republic to Iraq, had the upper hand. A golden opportunity to end the war as victors was denied to our nation and 8 years later, after so many Iranians were maimed and martyred, the poison chalice had to be drunk.
Today all of us Iranians should remember those who fell in the epic battle for liberation of Khorramshahr. Today we should honour those who still suffer the injuries of the eight year war and make sure they are not forgotten.

Email ThisBlogThis!Share to TwitterShare to FacebookShare to Pinterest
Labels: liberation+khorramshahr+khooninshahr+خرمشهر

Very beautiful said, Azarmehr.
I was at that time in tehran , 14 years old, and i can exactley remember how happy I was for the liberatin of Khorramshahr.
Ofcourse I couldn't know that 3 years later,my first love will be killed in that stupid war.
May god bless his soul and all of those brave men, and I can also remember how angry i was about everything and everybody, including Khomeini, Saddam, etc...

I agree with you...lots of ordinary people sacrifisied their lives for Iran...it's good of you that you do recognise that.....despite the fact that some of your pals look down at the history of war and don't recognise what ordinary people of Iran have done for thie country and that's what i call Nationalism....I think the history of the war needs to be re-written honestly and based on facts...there are still many war veterans who were wounded in the war and the state don't gives a shit about them....your sense of nationalism is admirable...but sometimes it just doesn't tunes in with some of your other political stances!!!