So what Happened with Stuxnet? 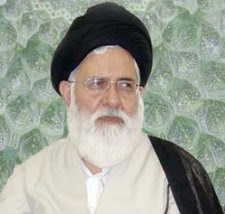 Friday Prayer leader of Mashad, NE Iran, is well known for his outrageous and beyond stupid sermons but I think one his claims, made two years ago, that the Hidden Imam (the Lord of All Ages) is helping Iran's nuclear industry, tops all of his shows.

In an interview two years ago with Raja News, Seyed Ahmad Alam-al-Hoda, claimed that Iran's nuclear scientists had been to see him in Mashad the year before and told him that to move forward with obtaining the nuclear technology, they had purchased a machinery equipment. "The machinery did not work however until the Hidden Imam pointed out there were tiny little holes in it which could not even be observed with the most powerful microscopes!!"

He then went on to say, "some dismiss claims that the management of the country is being aided and supervised by the Hidden Imam, they seem to think that after 1200 years of occultation, the Hidden Imam has become some idle figure living on an island with his family. Some ignorant people say that this island is the same Bermuda Island but the Americans have gone there and have said there is no Hidden Imam there."

Some may really have believed Alam-al-Hoda, when he made the claim about Hidden Imam advising the nuclear scientists about the defects in the machinery that had been purchased, but I wonder if they now ask, so why didn't the Hidden Imam do anything about the Stuxnet virus? Does he just advise on hardware defects and not software issues?

Alam-al-Hoda did however ask a valid question in that infamous interview with the Iranian hardline daily, Rajanews. He asked, those who think the Hidden Imam is not playing a role in running the world and managing Iran's affairs but instead is resting until he is called upon, should ask why would there then be a need for a 1200 year old Imam, when the Almighty might as well create one overnight and send him before it is the right time?

My heart goes out to all the poor and suffering of Iran, those who cannot get a proper education, no healthcare, no housing, with these morons in power!! I hope that stuxnet brings this regime to a speedy conclusion so all the people of Iran no longer have to suffer~! Amen.

Once again, this reveals the farcical nature of regime politics manipulating the sell-out clergy of religion. If proff however were ever needed that the current Iranian regime are truly hive-minded dumb, then just look at the TV coverage they allowed of the Tunisian uprising. Oh, of course I'm sure Khamaemei's black vultures hope and pray for an Islamic dictatorship to replace Ben Ali - just as theirs did after the Shah of Iran. But let's hope the Tunisian people are a lot more smarter than that. And let's hope the Iranain people are also a lot more smarter by following the brave Tunisian example that PEOPLE POWER can indeed overthrow a cheating, corrupt, murdering and tyrannical regime! So come on all you Iranian's who truly want freedom, justice, liberty, democracy and equality, what are YOU waiting for..???