Remembering the Martyrs of the Ashura Uprising Two Years Ago 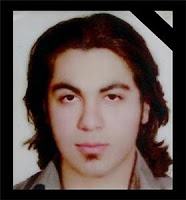 If Ashura is known by Shiite Muslims as the day of the uprising against tyranny, no other Ashura was as symbolic as the one in Iran two years ago. It became the peak of the protests by the Iranian people against the tyrant of our times, the "Supreme Leader", Ali Khamenei. For the first time in years, on the anniversary of Ashura, the people in Iran did not suffice to just carry out the traditional symbolic rituals to mark the day but actually went out on the streets and battled against all odds with the mighty forces of evil.

One of the brave who fell on the anniversary of Ashura  two years ago, was Amir Arshad Tajmir, son of the well known Iranian state Radio and Television presenter, Shahin Mahinfar.

"He had chosen his path, he took part in all the rallies and was with the people and alongside the people in their struggle and died with integrity and with his head held high" Shahin Mahinfar says about her late son.

"He had tried to rescue two girls on the day who were being beaten up by the security forces. I told him not to go out on that day, he said I am going for my country. I told him you are my country and he said don't be so selfish mom, your country is the 70 million people of Iran, and I am going for them." Shahin describes her last conversation with her beloved son and continues "One of the girls whom Amir  was trying to rescue came to his graveside once and told me everything. The girls were getting beaten up and the crowds were booing the security thugs, but Amir said booing won't do any good, lets try and help them. Having said that, he went and pushed one of the security agents. A law enforcement car then ran over Amir from behind.."
Amir fell but they couldn't just leave it at that. They were furious that someone had dared to fight back security forces who were beating up two female protesters.

"Another law enforcement force vehicle then drove over his body, not once but three times, my beloved Amir was ran over three times, his body was crushed, they killed him three times. I don't know what to call them? I believe even animals have honour but these ..." Shahin describes the last moments of the son she raised and her contempt for her murderers.

"I am proud I brought up a good kid like Amir, an Iran lover who loved his people, a young man with integrity. He has made me feel proud, but I feel my back is broken with sorrow. Amir's father and I are both proud of him, he gave his life to save two others. He was my son and he is gone now, but these days every young person whom we meet, tell us they are our Amir. We gave one Amir and we got thousands back. I still hear his voice on the night of Yalda, when he whispered in my ear, 'I love you mom'. It was as if he knew he was saying it for the last time." Shahin continues with pride and with pain and asks the unanswered question:
"what was the crime of our kids? All they wanted was freedom and prosperity for their compatriots. Two years have gone by but he is resurrected in my mind every second, they keep killing my child in front of my eyes and I can do nothing about it. But I am not the only one, I know there are many more mothers like me, I just ask sometimes, does God never hear the cries of mothers like us? In all these years, does he not hear the cries and the curses of so many mothers? Where is that just God they taught us about?"

A moving tribute for a deserving young man who gave his life for freedom and democracy.

May God avenge his blood!!

Hard to hold back the tears in reading his mother's tribute. May the people's struggle for justice and freedom be victorious in Iran, including that of the Kurds.