Every Saturday, Syrian ex-pats opposed to Bashar Assad's regime gather outside the Syrian embassy in London. They peacefully chant, they sing and they remember their martyrs. 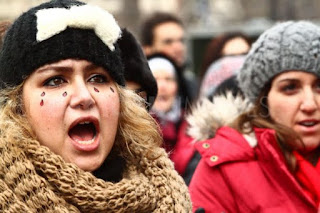 After yesterday's brutal massacre in Homs however, they seemed consumed with sheer rage and frustration. The Syrian protesters just wanted to do something more for their fallen compatriots. One Syrian woman told me, more than twenty of her family members have been murdered by Bashar's henchmen, since the uprising started. Many had camped outside the Syrian embassy in freezing cold since the night before. There were already signs of paint thrown at the Syrian embassy door, and today they could no longer tolerate a building that represented Bashar's murderous regime in front of them and they pushed through the police lines.


They threw whatever they could at the embassy, water bottles, eggs, stones and bricks. As the front line of protesters pushed the police back, the ones at the back threw bricks and stones which smashed the embassy windows. Police pushed back the protesters and the protesters came back again, getting closer and closer to the embassy door.


Protesters where then penned in behind the barricades for hours in freezing cold weather and strangely there was no sign of Press TV!

This Iranian reporter from Euronews made me laugh and perhaps explained why Euronews Persian,  launched last year, has almost zero viewers. I told him about the Iranians in the protest who had come to express solidarity with the Syrian people and he said he was not 'allowed' to talk to any Iranians because it was not in his "brief". What a pratt!

There was also this photographer from Demotix. We sort of recognised each other from previous occasions. 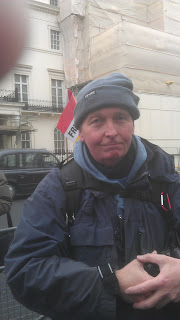 He told me he was outside the US embassy last Saturday and had seen how supporters of Bashar Assad, IR's Supreme Leader and Stop the War activists had attacked Iranian pro-democracy protesters for having banners of Free Iran and chanting No to Dictators. He told me, Chris Nineham from Stop the War, had asked him to remove the photos he had posted which showed Iranian pro-democracy supporters had been attacked and he had rightly replied to Nineham "I am a photographer and not your bloody PR man". 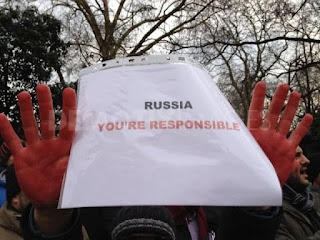 Undersandable that pent up feelings overspill, but I hope the intelligent arguments of protesters prevail above violence? No surprise that PressTV didn't cover this. A) Because it doesn't suit their Assad kiss-ass loving agenda. And B) Now that their voice has virtually become impotent in the UK, they no longer have to hide their totally parochial and bias propaganda in support of both the Assad and Iranian Regime. Their current Webpage Comments writen by the bulk of their nasty hate-filled Basiji Gestapo attest to that! Still...Interestng to see how Tunisia is the first country to kick out the Syrian Embassy isn't it? Ha! One in the eye for Khamenei's so called 'Islamic Awakening' then eh! And once it's also firmly established that both Khamenei and Nasrallah are the REAL foreign meddlers in helping their pal Assad to kill freedom seeking Syrian's - this true gun-gunning triumvirate had better start counting their last breathes. For despite it all, the days are fast running out whereby even the likes of Russia and China won't be able to protect them!