Parviz Shahriari, grew up in a Zoroastrian peasant family in Kerman. His parents toiled on the lands owned by feudal landlords and after his father died, he had to work alongside his mother to support his family. None of this hardship and poverty however, stifled his passion for learning and in particular for learning what he loved most; mathematics. He worked as a porter in the railway and studied in Tehran university at the same time until he graduated in 1953.

The fifties were a politicised decade which saw many students become active in politics and Shahriari's humble beginnings and the hardships he experienced during his childhood gravitated him towards the Tudeh Party, Iran's Soviet backed Communist Party. He was arrested several times and learned Russian in prison.

Shahriari's greatness however was due to his enormous contribution in making mathematics and physics interesting and accessible to thousands of Iran's youngsters, including myself. His numerous translations of mathematics books made the boring school mathematics fun and challenging and those who were lucky enough to be his pupils speak of his classrooms as sheer delight. One such former pupil of Parviz Shahriari is Firooz Naderi the current director for Solar System Exploration at NASA's Jet Propulsion Laboratory (JPL).

Parviz Shahriari was also a founding member of some of Iran's best schools like Kharazmi and Marjan schools. Apart from his contributions in mathematics and sciences, Shahriari also published some cultural magazines too.

Shahriari was also jailed for 18 months by the Islamic Republic and the regime deprived him of his pension. He had to work until the very last days of his life to have an income.

During the war with Iraq, Shahriari published a magazine which he had named 'Peace with Mathematics'. He was called up by the Ministry of Guidance and told there should be no talk of peace and to change the name of his magazine or stop its publication. He told the Guidance Ministry official 'but this is peace with mathematics not with Saddam' and he was still told the ministry will have no mention of peace anywhere. Shahriari had to change the name of the magazine to "Getting Acquainted with Mathematics". This anecdote perhaps describes just one tragical aspect of the 1979 revolution and the "cultural revolution" which subsequently followed it, i.e. Iran's elite academics being "guided" by the illiterate zealots.

The greatness of men like Shahriari always win through at the end however. Here some of Iran's  school kids give the humble Parviz Shahriari a standing ovation:


His indomitable spirit made him fight back and survive several heart attacks and strokes until he finally passed away last Firday at the age of 86.

Not one official from the Islamic Republic's Science Ministry attended his funeral held yesterday at the Zoroastrian cemetery and for sure it was better that they didn't. What an insult it would have been for someone like Kamran Daneshjoo, Isalmic Republic's science minister with his fake PHD to attend the last farewell with the great Shahriari. 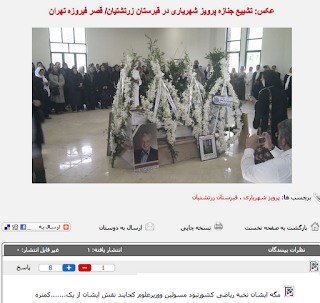 For all those Iranian kids who became interested in maths and physics through Shahriari's works however, he will live for many more years to come.

Well done Potkin, excellent post as always :) Keep at it!