Once again, the Islamic Republic with the help of its petro-Dollars has gone the full monty in gathering a wide selection of "useful idiots" for another conference in Tehran. This latest gathering by "useful idiots" is named "Festival of Independent Film Makers" and is hosted by none other than Mohammad Ali Ramin, the Neo-Nazi crony of Ahmadinejad who had organised the International Conference to Review the Global Vision of the Holocaust, or better put, gathering of holocaust denying fruit cakes.

One of the "Independent" film makers who is attending this festival is the Italian female film maker, Santa de Santis. Seen in the picture above, wearing the compulsory scarf while being interviewed by the IRI state TV and contributing greatly to the propaganda efforts of a tyrannical regime. Of course, this beautiful "Independent" film maker, doesn't always wear the hejab, in Rome she dresses rather differently and a lot more provocatively, as seen in the picture above on the right.

One thing which has always puzzled me about the "useful idiots" in the West, is that they regard themselves as "progressive" when they stand up for the right of women to wear the hejab, good for them, I too support this choice; but they are always silent when it comes to defending the right of women not to wear the hejab. A choice which they take for granted and probably never think about.

Amusingly, Santa de Santis also posted this interesting status on her Facebook. I used the FB translator to unravel her status in Italian and it said this:

In fact, I wonder if she has thought about many more things before attending a conference hosted by a neo-Nazi sympathiser? For example has she thought what would happen to Iranian film makers if they attended a state organised conference outside Iran? Does she even know about the film makers jailed in Iran? Does she realise how demoralising her attending this conference is for her Iranian colleagues who do not have the same privileges as her? Will she ever speak up for them? or as is more likely the case, she will just enjoy the attention and wining and dining she always craved for? 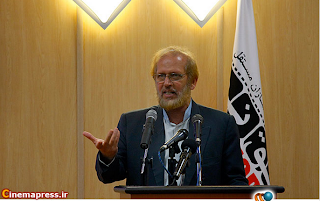 Usually I try to be articulate, but these 'Lord and Lady Whore-Whore's' of the Regime in West just turn my stomach.