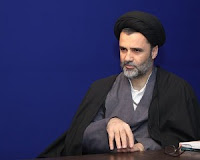 One of the most vivid memories I have from the "Cultural Revolution" was before the final onslaught, when a leader of one of the gang of thugs who was sent to beat up the students and rip up the posters  became confused when he came across a notice on the wall which had no pictures or insignia and was just writing.

Poor hoodlum couldn't read or write and didn't have a clue what the notice was about and was asking others if it was dissident writing. I had gone along to one of the universities with my other school friends to help the students who were resisting the orders to evacuate the university grounds and looked at my friend and remarked "Look at this goon, he can't read or write and he wants to say how universities should be run!"

Today I came across an interview with Hojat-ol-Islam Nabavian, a disciple of Ayatollah Messbah Yazdi, in this website in Iran, Mashregh News. The title immediately grabbed my attention, "Galileo's Theory was the Origin of Man's Diversion from Monotheism/Universities are the Manifestation of Satan".

To make the long story short, they think the "Cultural Revolution" in the 80's has failed and Iran's universities remain secular, which is why the university graduates are not pleasing the establishment. Therefore another cultural revolution is needed and Hojat-ol-Islam Nabavian, who also became an MP in the last Majlis "election", explains in this interview that Iran's universities are copied from Western universities and they need to become Islamised and teach religious-science. Nabavian is also a member of the Education and Research Commission of the Majlis and heads its "Expert Committee".

Hojat-ol-Islam Nabavian, like most other clerics in Iran, has to show that he is a well read man. His interview with Mashregh News is full of name doppings. He mentions Descartes and the Aether medium, he quotes George Holyoake, gives examples of what happens to car running at 50 "miles" per hour, if its engine is suddenly switched off and at the end of all that; he gets Galileo and Newton mixed up!

Another version of the illiterate hoodlum I remembered who wants to tell others how universities should be run.