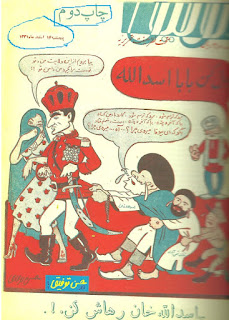 Ask a useful idiot or an Islamic Republic apologist how they justify the tyranny and the religious apartheid in Iran and you can bet your bottom Dollar that they will mention the Mossadeq affair.

What happened in 1953 is their panacea for anything that can not be justified in the Islamic Republic. "Iran has suffered a lot, the CIA overthrew the popularly elected Prime Minister Mossadeq" is their cliche reply and they say it in such a pompous way as if they are the most learned scholars of Iranian post-war history.

Except that the story they have been taught to regurgitate isn't quite what happened. Mossadeq was not elected by the people, he was appointed by the Shah and when the CIA backed coup failed, it was the clerics led by Ayatollah Kashani, the darling of the ruling clerics in Iran today, who let the thugs and hoodlums loose and toppled Mossadeq.

I have written about this before and I have also written about some of the animosity and utter contempt that Iran's ruling clerics have towards Mossadeq.

Today, I came across an old cartoon from Iran's satirical magazine, Towfiq, which back then was the most popular of its kind. It shows the Shah trying to flee Iran with his wife but the clerics are frantically trying to grab him, pleading with him not to leave them. It is written Ghanat Shams Abadi on the second mullah pulling the Shah. If I am not mistaken it is a reference to Shams Ghanat Abadi, the cleric seen here below on the right next to Ayatollah Kashani, sitting under the portrait picture on the wall. 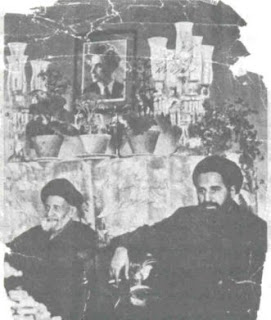 Below is the translation of one of Ghanat Abadi's speeches at the Majlis during the Mossadeq time:
"I am afraid respected representatives. If no thought is given to the hungry and unfortunate people, this country  will fall into Communist hands and Communism will swallow Iran and our Muslims. Have they not told you that once again the Communists have beaten up some of our patriotic workers?...."