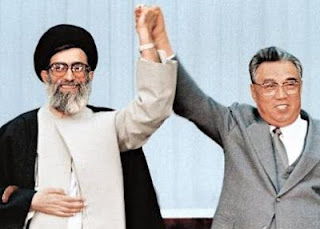 You can tell a lot about a man, from the friends he keeps and what better friend for the Supreme Leader of the Islamic Republic than North Korea?

IRI websites enthusiastically reported the meeting held, during the recent NAM conference in Tehran, between the Supreme Leader and Kim Yong Nam, the North Korean Chairman of the Supreme People's Assembly, or as some suggest the de facto head of state in the People's Democratic Republic of Korea.

"During the meeting, the Supreme Leader reminisced about his trip to North Korea, when he was a president and praised the late North Korean leader, Kim Il-Sung".

Supreme Leader praised the Great Leader sort of thing, it is a usual tradition amongst big huge leaders. 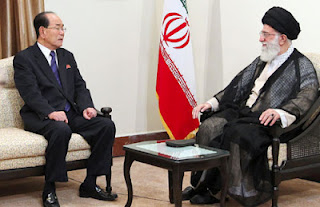 Supreme Leader's trip to North Korea during his presidency, must have been a big landmark in his life, on his official website he claims it was after his speech in North Korea that the late Ayatollah Khomeini remarked about his potential to be the next leader of the Islamic Republic:
"When Ayatollah Khamenei was visiting North Korea, the late Imam watched the T.V. reports including a large number of people who gathered to welcome him, as well as his marvelous speeches and debates. Then he said that Ayatollah Khamenei really deserves to be a leader."

Every year, the Supreme Leader edges Iran more towards becoming another North Korea and lets not forget the small detail that slipped through on Russia Today Television, when it mentioned the Supreme Leader as one of the notable alumni of the Patrice Lumumba University. The RT program was celebrating the 50th anniversary of the university.

Funny, but when the Islamic Revolution came, a lot of Communists were imprisoned. tortured or executed. It was deemed an idealogy completely opposed to the Islamic faith. Now look - hypocrites all by making friends with the devil, because the devil are about the only friends this dark Lord of tyranny can get! Again, Khamenei isn't a great spiritual leader. He's just a male michismo power crazed thug - who's signature has committed all the crimes on Earth and also all the sins against heaven. I just wish the Iranian people would sent him off to meet the real Devil where he belongs very soon!

Hypocrisy above ideology to bolster both their tyrannies!