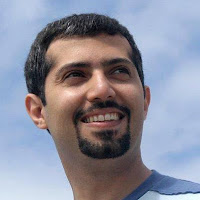 Families of 25 martyrs and veterans of the 1980s Iran-Iraq War have signed an open letter in support of Hadi Heydari, cartoonist for the Shargh newspaper, which was closed down on Tuesday.
Despite all the efforts by the Ministry of Guidance and the hardliners in the Islamic Republic to use their self-interest driven interpretation that the cartoon printed on the back page of the Shargh newspaper, was an  insult to the war veterans and war martyrs of Iran, the people who matter most, i.e. families of war veterans and martyrs, have expressed their support in an open letter for the Shargh cartoonist, Hadi Heydari.
Twenty five family members of some of the most prominent war veterans and martyrs of the Iran-Iraq war said in an open letter that they have always admired Hadi Heydari's 'awareness raising' and 'thought provoking' cartoons over the years.
The open letter addressed as 'Dear Brother Hadi Heydari',  said "We see that these days, some are misinterpreting your latest cartoon and using it as an excuse to silence the pens...We are familiar with you and your work and back your sincerity and honesty".
So there we have it, if anyone should have been offended by the cartoon, it should have been the families of the war veterans and war martyrs but in fact they see nothing offensive about the cartoon and back the cartoonist of Shargh newspaper.

Unfortunately, Open letters do very little in the rapidly Closing down society inflicted by the Iranian Regime. With the World Wide Web about to be shut down in Iran, we can only hope that this will be the trigger that finally says enough is enough! Sorry to say it, but only another people's revolution will remove these thugs and despots now! Otherwise if people just sit idly by, Iran will definately become the MIddle East's North Korea!