Iran Students Protest at Political Exploitation of the War Martyrs 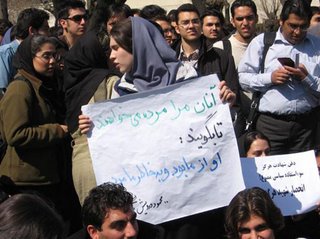 Thousands of students at Sharif University, Tehran, are protesting at attempts by the authorities to bury empty coffins in the university grounds.

The Iranian authorities are claiming these are the coffins of the Iran-Iraq war martyrs. Such burials have become a routine procession by the authorities to exploit the genuine feelings, the Iranians have for their martyrs who sacrificed their lives and defended Iran against the Iraqi aggression, 18 years ago.

The large placard above says "They like me dead so they can say, 'he was one of us and died for our sake' "
The smaller placard says "Stop political exploitation of our martyrs - Stop monopolising the Martyrs".
Posted by Azarmehr at 3:39 AM

I believe the Student Movement is not dead! That is one of the signs of their vibrant activities!