What is her crime? 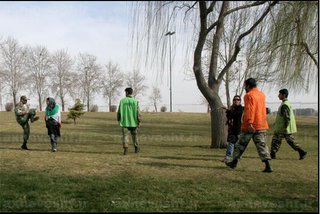 What is the crime committed by this Iranian girl who is about to be kicked?

If it was any of the above she would have suffered much worse.

Its because she wanted to watch a football match!

So, can she go and complain to any one? No.
Can the Iranian press print the picture and force the government to have a an inquiry into the matter? No.

Four revolutionary guards rush towards the defenceless girl to perform their Islamic duty by kicking the hell out of her, in order to bolster the Iranian people's resolve against imperialism!
Another girl pleads for the guards to stop.

I can just imagine an SWP activist being there; he/she would have probably said:
"Yes I know they brutally kicked you for no good reason, but they are after all anti-Imperialist and not even American! "

I want to know from the "feminist" Elaheh Povey and the SWP whether Sakina Naisi, a 40 year old pregnant woman currently in Karoon Prison in Ahwaz City, is free and empowered. Her guards beat her so badly that she is bleeding from the vagina. She is being denied medical treatment and she is certainly having a miscarriage and is possibly likely to die, according to her relatives. Her crime is being Arab - the regime hates all minorities, particularly those of the female gender (although Iran has always been a multi-cultural, multi-faith society and used to be proud of the fact). I want the SWP to spell out exactly how she is free and why her life should be sacrificed for the sake of Ahmadinejad's anti-imperialism. I want to know how she is freer than a "Western" woman.

IRI is bad but this doesn't justify cooperating with the enemies. This will result in slavery and you may soon see your country mates on TV with hoods on their heads and wires hanging off their genitals.

Enemies are just looking for another pupet like the shah or Hamid Karzaei. It looks as if they are mulling Reza Pahlavi for this role and are offering such people $75m.

I don't blame you. This is good business to be in.