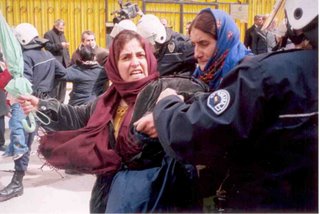 Those handful of simple ignorant Iranians who may have been duped by the Pan-Turkist nonsense broadcast from Gunaz TV station, should take a look at this picture and see how the "Turkish Brothers" treat the desperate iranian refugees. This is how a peaceful protest outside the UN offices by Iranian refugees, protesting at the incompetent UN officials, is treated by the Turkish police.

To the corrupt Turkish police and the crooked Turkish authorities and the incompetent UN officials, the Iranian refugees are only a source of income and cheap labour. Iranian refugees have to pay to register with the UN and the Turkish police, they have to bribe the officials to be interviewed about their refugees status, and even after years of waiting for the corrupt UN to accept them as political refugees, if their refugee status is finally accepted and they are allocated a country to travel to, they then have to pay the Turkish authorities for the privilege of leaving Turkey!

Look at the Turkish police in the background grabbing the Iranian kid away from his mother.
Did our people ever have to go through such humiliation before 1979??
Posted by Azarmehr at 5:23 AM

These barbarians should not be allowed to be part of EU or anything similar to that.

I cannot see anyone beated in this picture.police is for security. I cant see anything in this picture for beating and have heard nothing about iranian refugees on turkish tv and newspapers.if there had been such a thing, turkish human right associations would say something.

what is the reason that you hate turks so much?

oI made a web search and learned these are kurdish refugees come from iran via northern iraq, who protested UN and, the police did not allow them enter the UN office.
so what is the connection between gunaz tv and kurdish refugees?

Oh God! what an idiot you truly are Ayhan! an absolute apology to the human brain. Gunaz TV says the great "mother country" is a Utopia. The picture clearly shows the reality of a Fascist, Chauvinist (Gunaz TV's favourite word) police who pulls away a child from his mother. Shame on your police and your corrupt people and your hired Gunaz TV presenters.

can you tell me a big countr where police is kind to protesters?
what about france and germany?
understand , turkey is not in scandinavia,it is in middle east and dont have a rich economy. we are half middle east half europe. what do you expect from the police?

how can you blame the police for being chauvinist? if they beat people in turkey, they dont differ the people they treat equally:). they may beat students, teachers, kurt terrorists, islamist people etc..
polie is same in many contrues..

Very common in Turkey you know. They hate everything non-turkish. This is a state where "human rights" are an alien word. They wont let go of Kurds, why? Because they brought Turkey all its cinema, music, and cultural traditions. When they dance, they dance kurdish - halay, their biggest musician Ibrahim Tatlises is kurdish, their biggest actor Yilmaz Guney. The only things Turkey can show the world are originally Iranian. We iranians support the kurds against your fascist made-up fairy tale Turkey. VIVA IRAN ZAMIN.