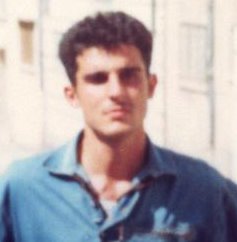 Below is a translation of the last message recorded in prison by Iranian political prisoner, Valiollah Feiz Mahdavi, who is facing imminent execution. In his message, there is no plea for clemency from the authorities, there is no plea to have his sentence commuted; instead Faiz Mahdavi, is asking his compatriots "not to abandon our just fight against the oppressive regime of the mullahs".

So where are the Iranian "Human Rights Activists" who only beat their chests for Guantanamo terror suspects? Where are those who have the publicity platforms at their disposal but instead abandon their own people to champion more fashionable causes? Are they not ashamed? They should be and so should the Islamic Republic apologists who desperately try to portray some sort of an acceptable face for the clerics ruling Iran on the international stage. And what will the regime achieve by executing another political prisoner? Will the mullahs be more acceptable to the Iranian people by executing another young man with a whole life ahead of him? They will achieve nothing, except more determination amongst those who oppose their corrupt rule of lies and deceit.

"Warmest greetings to my dear compatriots in Iran and other countries! My name is Valiollah Feiz Mahdavi. I was born on 5/11/1358 (1979). In Autumn 1380 (2001) ( I was arrested by the Intelligence Ministry agents and charged with undermining national security and attempting to join the PeopleÂ’s Mojahedin Organization of Iran in Iraq. They kept me in solitary confinement for 546 days, during which time I was interrogated and subjected to harshest physical and psychological tortures. I was kept in a little, dimly lit cell; and when moved for any purpose I was shackled, cuffed and blindfolded.These were the hardest days of my life. On a number of occasions they woke me up from sleep in middle of the night, took me outside, and told me "say your last wishes." Then one of them would fire a shot. Thinking I was hit, I would spend a few minutes in state of shock before being led back to my cell.After this hellish period, they arranged a trial for me. I was sentenced to death in a summary court presided over by a judge named Haddad and held at the 26th branch of the Revolutionary Court in Tehran. At my sham trial I rejected all the charges and denounced the illegitimacy of the whole procedure where I had no legal representation and no jury was present. On the same day, as a punishment for my protests, I was transferred to a prison in Kermanshah (Dizelabad Prison), where I spent the next few months under harshest conditions. In the last days of 1382 (2003), they returned me to Evin Prison in Tehran. But again, after a few months, because of an argument with Bakhtiari, the erstwhile head of the National Organization of Prisons, I was sent to a prison in Karaj (Rajai Shahr). I remember on my arrival the then head of the prison, Maleki, told me: "none of your protests would leave the walls of this prison".

From then to this day I have been a target of threats and even assaults by criminal prisoners, instigated by prison officials. Calling my days here "living" would be an outright abuse of this word. Of course, this is the situation of all political prisoners here, and thus has to be considered "normal" for them. A few days before the 1385 Norooz I was formally notified by the judiciary deputy of the prison that my death sentence will be carried out on Ordibehesht 26, 1385. But even before this official notice, both the head of the prison and the head of my section, Section 6, had on a number of occasions told me that my sentence would soon be carried out. Just last week the head of Section 6 summoned me to his office and, in an angry, threatening voice, told me: "why do you publicize your condition and sentence? It is not going to help you any more than it helped Hodjat Zamani" My dear compatriots and friends,In the course of my struggle I learned that for freedom fighters it is not all that important to personally see realized the ultimate aim of their efforts and sacrifice. What is paramount for them is steadfastness in struggle. I truly believe that freedom, democracy and justice are as vital to human life as the air one breathes. I thus permit myself to ask you not to abandon our just fight against the oppressive regime of the mullahs. I also have a few words for the leaders and minions of the regime: we will never resign ourselves to the ignominy of surrendering to your repressive dictatorship, even if it will cost us our lives.Long live an Iranian nation free from injustice, oppression and exploitation - Valiollah Feiz Mahdavi (Rajai Shahr Prison)"

I've posted this on my blog for more awareness. Also it might be of interest that another political prisoner (Amir-Abbas Fakhravar), that has escaped from jail while on leave, has now successfully left the country and is heading for the U.S. where he will meet with U.S. officials. You can find out more here: