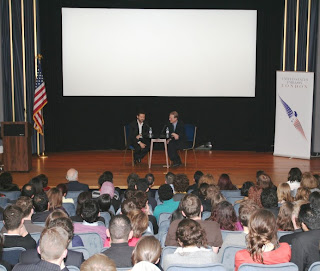 Earlier this week, the US embassy in London showed a pre-premiere screening of the film, The Kite Runner, based on the best selling novel by Afghan-American writer, Khalid Hosseini.
I have been too busy this week to write about the event in my blog until now, but let me tell you straight away, it was an amazing film.

I must admit I had not read the novel and I did not know what to expect. The first thing that grabbed my admiration before the movie even started, was the calligraphy of the starting titles. The film is about many things, the story of Afghanistan, friendship and loyalty, a proud father, the long lasting guilt of showing cowardice, sacrifice, courage, sudden upheaval of lives, exile, re-building of lives in a new land, the roots to the original homeland, new freedoms and opportunities, the misery of living under extremist totalitarian regimes and much more.

You could say I could somehow relate to each one of those topics above and perhaps thats why I was so mesmerized by the story of the film which was so beautifully told and so well directed.

After the film, Khalid Hosseini himself joined the panel which was hosted by the US embassy's cultural attache, Michael Macy. Khalid talked about his own life, his book and the making of the movie and then fielded the questions from the audience. The last question was asked by a woman sitting right next to me and it was which scene in the film was the most memorable for Khalid himself. I can't remember what Khalid Hosseini answered, because somehow my own thoughts made me ask the same question in my mind from myself. It was really difficult to pin point just one scene.

Loyalty is so significant for me in my own friendships and the director, Marc Forster, could not have picked a more suitable young actor for the role of Hassan which was so genuinely played by Ahmad Khan Mahmadizada, in so many scenes which got imprinted in my mind.

Hassan's fascination with the story of Rostam and Sohrab from the Iranian Book of Kings (Shahnameh), and the slight similarities between this saga from the Shahnameh and the story of the film was another memorable scene which became more significant once the entire plot was unfolded.

The entire upheaval of exiled communities and the scenes related to it struck a chord with all of those who have experienced exile, as an Iraqi woman in the audience mentioned in her question.
There was a couple of factual mistakes or perhaps as Hollywood would like to call it, "artistic licence", in the film. The Taliban were shown coming to the stadium after a game of football watched by men and women in burkas, where as in fact Taliban did not allow football nor women being present in a mixed audience with men even in their burkas. Ignoring this minor Hollywood ignorance, The Kite Runner is a film well worth watching. It will keep you glued to your seat and you will talk about it with others who watched it for days after.